Under a big pink dome behind Circus Circus on the North Strip.

Yes, but I recommend buying the all day pass so you can come and go. You could chose to buy passes on individual rides for $6-12 but that can get very pricey very quickly.

The park is small but the rides are fun and the air conditioning feels great on hot days. Not a place to go if you don’t want to be around children.

If you like amusement parks you’ll enjoy this one – but only for a few hours and then you’ve done everything. 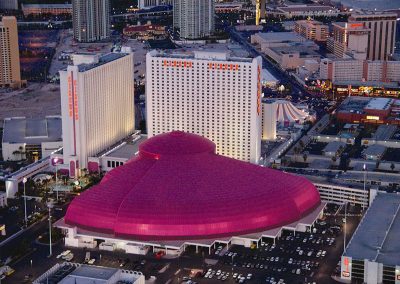 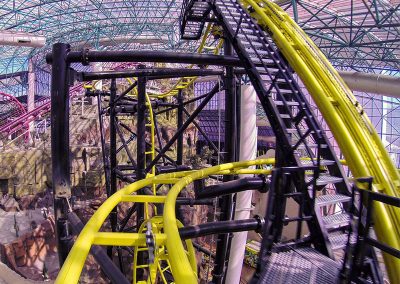 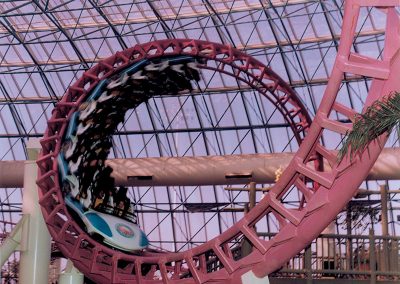 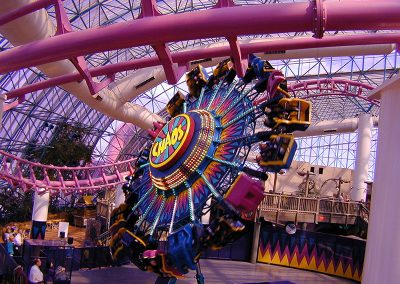 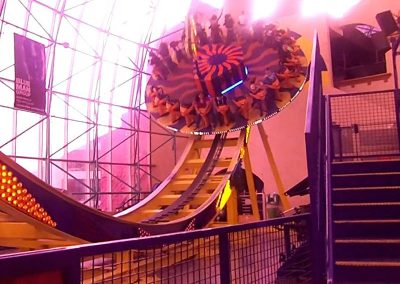 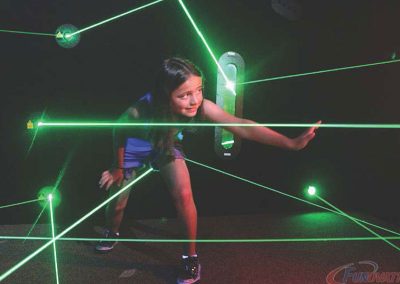 One of the last remnants of the failed “Las Vegas is for families” experiment of the early 1990s is this indoor amusement park behind Circus Circus. How it has survived while pretty much everything else kid friendly has been replaced by a nightclub or a nightclub or another nightclub is really a matter of exclusivity; there is simply nothing else like it on The Strip and therefore people who insist on bringing their kids to Vegas don’t have many options other than to bring them here.

Which is not to say that if it weren’t the only game in town that it wouldn’t be worth visiting; it would be, especially if you have those kids in tow or you are looking for a pleasant, air conditioned diversion to get you away from the slot machines for a little while.

The park is compact – you can get from one side to the other in minutes even with crowds – but they manage to cram a lot into that relatively small space. There is the Canyon Blaster roller coaster, billed as the world’s only indoor double-loop, double-corkscrew track, and a bunch of other spinny, twirly, twisty rides that produce thrills in some and nausea in others. There are some tamer rides for the less adventurous and/or small children. They also have 4-D theaters, rock climbing walls, a miniature golf course, mini-bowling, midway games, laser tag, a Batman-themed laser adventure game, and more.

El Loco is the biggest attraction for coaster buffs. It starts with a 70 foot climb that is followed by an over and under backwards dive that creates 1.5 negative vertical G’s. As a point of reference, negative 2 is about the most the human body can withstand. The ride also features a 45-degree banked outward turn, a 180-degree turn that goes into a barrel roll, and a greater than straight down diving drop. The four-person open-air cars tilt and roll, giving riders the sensation of flying during the 75-second ride. Loco indeed.

To make room for the new ride, they got rid of the classic Rim Runner water flume, one of the park’s original attractions.

So yes there is plenty to do here but let’s be real: this isn’t Disney World. Or Disneyland. Or even California Adventure. Even the most dedicated of amusement park junkies or the entertainment starved children will do pretty much everything worth doing after a few hours. And with the exception of El Loco, genuine thrill seekers will probably be better suited on the rides atop the Stratosphere tower than here – everything else is a little tame for those looking for an adrenaline rush.

You could do individual rides but at $6-12 per, you’ll probably be better served doing the all day pass even if you aren’t going to spend all day there.

Worth noting was the October revamp of the place into Fright Dome, which kept a lot of the rides going but added themed haunted houses, costumed actors, and Halloween flavored shows and attractions. After 15 years they are not doing it anymore, effective in 2018, although there may be a Halloween themed event in its place.

If you’re looking for family style fun there aren’t a lot of options in Vegas anymore so look for the giant pink dome to at least get you started.