A 550-foot tall observation wheel that is the biggest of its kind in the world.

In between The Linq and Flamingo hotels on the Center Strip, at the back of the The Linq Promenade shopping and entertainment district.

It’s not cheap, but if you want a really great view of Vegas, this might be one of the best in town.

There are no bathrooms aboard the cabins – take care of your business beforehand. 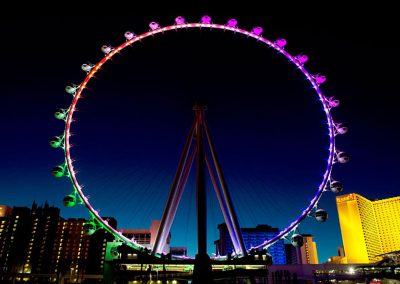 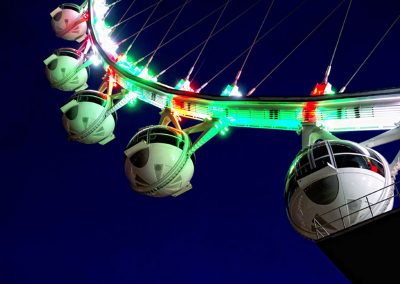 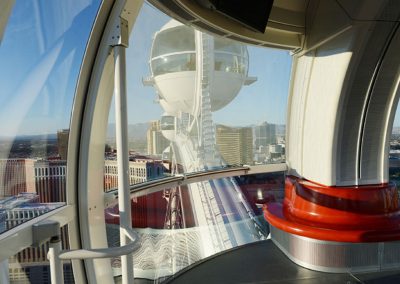 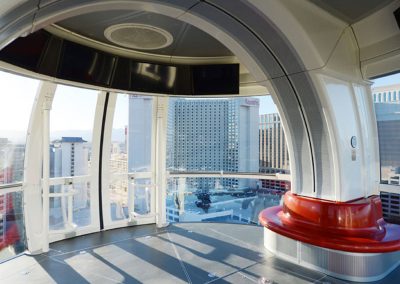 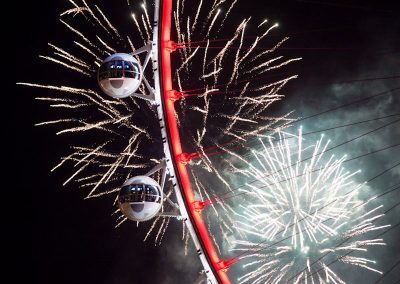 The first reference I can find for a plan to build the world’s tallest observation wheel in Vegas is way back in 1999. The Voyager wheel, as it was called, would’ve been built at a new, water themed resort next door to the Sahara where Wet ‘n’ Wild used to be. Later the wheel plans were associated with The Rio and with the jazz-themed resort called Montreaux that was to replace The Frontier.

Obviously none of those ever came to fruition but Vegas finally has the world’s tallest observation wheel with the 2014 opening of The High Roller. It has already dramatically altered the Vegas skyline and is pretty cool, albeit expensive, addition to your list of things to do in Sin City.

Standing at 550-feet high, the wheel is located at the end of The Linq Promenade, a shopping promenade between The Linq and The Flamingo. You can get tickets at the box office but I highly recommend buying them online ahead of time since the lines can be very long. You’ll get your choice of available times set in 10 minute increments (7:50, 8:00, 8:10, etc.) and you have to be there at your prescribed time or your ticket is useless unless you get one of the more expensive “Flex” passes, which allow you to come any time you want on a certain day or within a three-day period.

There are several queue lines and areas on multiple levels. When I visited at about 8pm on a Saturday night there was absolutely no one in line – we walked in, zipped upstairs past the full bar (yes, you can take drinks on board but only those that are purchased here), and walked immediately out to the loading area. Based on the number of people I saw standing in line to buy tickets that was probably an anomaly so be prepared to wait.

The wheel never stops rotating – it moves slowly at a pace of about one foot per second so you’re able to get on and off but you kind of have to hurry and hope the people in front of you are doing the same. Just in case they aren’t, there are giant nets underneath the loading area to catch anyone who might fall. This could be a ride in and of itself!

The High Roller has 28 high-tech pod-like cabins, fully enclosed and air conditioned. Maybe a little too air conditioned – the one I rode was freezing cold although there had been a rather sudden temperature drop outside after a storm moved through so maybe they just hadn’t caught up yet. TVs ring the cabin giving you updates on how far up you are and lots of random factoids that you can absolutely ignore.

The floor and ceiling are solid but most of the walls are glass, so you get great views without too much terror for those with height phobias like me. As mentioned, it moves very slowly so there is no thrill ride type sense of movement – in fact, you kind of have to really pay attention to the surroundings to know that you are moving at all. There were moments when I needed to hold on to something just to feel a little more secure but as long as I didn’t walk right up to the glass or look down, I was fine – and I’m a big baby about these kinds of things.

Each cabin is billed as being able to hold up to 40 people but if you happen to get stuck on one that is that full, be prepared to jockey for prime viewing space. The one I was on had about 25 people and it was tough to get enough open window space to take pictures.

The views are pretty cool from way up there. You can see most of the Center Strip, including the Bellagio Fountains, and pretty much all of the South Strip including CityCenter and Luxor. The North Strip is blocked by nearby tall buildings like Palazzo but there’s not as much interesting to see up there anyway. Beyond The Strip you can see all the way to Red Rock Canyon to the west and Boulder Highway (and beyond) to the east.

It takes about 30 minutes to make a full revolution. There are few seats but not enough for everyone so be prepared to stand for the duration.

Prices range from $25 for a ride during the day to $37 for a ride at night, which is probably when you want to go to get the best bright-lights-big-city views. Add in extra dough for the flexible time options all the way up to $52 for a VIP, skip-the-line experience. There are some discount options available, kids ride cheaper, they have an open bar car for a few extra bucks, and they have specials so check the website for specifics for when you are going to be there. $25-$35 is a lot for a 30 minute ride, especially when the significantly taller Stratosphere Tower is only around $20 and you can go anytime you want and stay for as long as you want. Granted, it doesn’t go around in a big circle, but still.

And if you want to ride the world’s tallest observation wheel you should hurry up and do it in Vegas while you can. Plans are underway to build even bigger wheels in other cities.