Location, lack of a lot of extras.

Far north side of town too far from the action.

Can be very cheap to stay here.

The basics are covered but not much else. 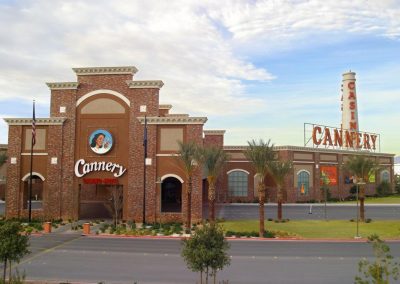 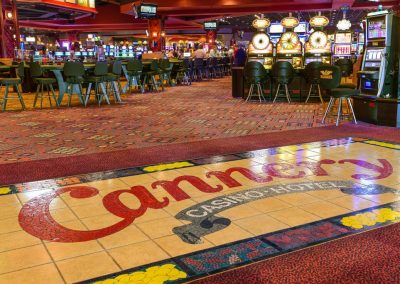 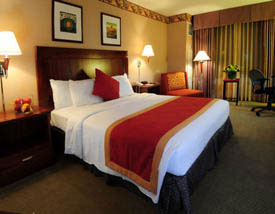 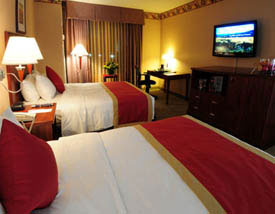 The Cannery is not a billion dollar palace on The Strip but it is still impressive in ways that have less to do with glitz and glamour and more to do with honest-to-gosh value.

The overall design of the hotel and casino goes after a retro vibe by romanticizing a 1940’s wartime industrial theme – think Rosie the Riveter with slot machines. As themes go it’s tastefully executed and fun. A 120-foot smokestack points the way from the 15 freeway and as you walk inside notice the playful details such as the can-shaped door handles, the brightly colored art renditions of ’40s pinup style posters, and more.

The casino has all of the latest slots and video poker, dominated by penny machines, plus a few table games. Around the fringes of the room are several restaurants serving the basics (steak, Mexican, Italian) and the Cannery Row Buffet, a large cheerful room filled with various culinary food-stations.

The primary entertainment venue, The Club, as it is known, is a giant “black box” of a room that can be reconfigured into a myriad of entertainment possibilities. Move the stage to one side, fly in a couple of collapsible walls, throw in some seating and you’ve got a traditional proscenium stage theater. Move the stage to the other side, add some tables, and open the big garage doors to the buffet and you’ve got an expanded dining area with entertainment. Set up the dance floor on a warm summer night and open the giant glass wall and you’ve got an indoor/outdoor club complete with a high-tech lighting and sound system. Or throw open that glass wall and set up some food booths and games in the adjoining outdoor courtyard and you’ve got a street fair, perfect for springtime festivals.

Movie theaters feature all digital projection and sound so that could provide an amusing high-tech distraction if the slots aren’t hitting.

The 201 rooms are located in a three-story motel-style building adjacent to the main casino. They are stylish but motel-style basic with a bed or two, a table and chairs, and a cozy bathroom. Additional features include flat screen TVs with cable and pay-per-view movies, dual line phones, WiFi (for a fee), hair dryers, and irons and boards.

Service, as you would expect if you’ve been to any of the locals joints, is very friendly – much more friendly than you’ll find on the sometimes snobbish Strip or even Downtown.

Prices are on the inexpensive side. You’ll probably be able to get a room here during the week for about $70 and in the $125-$150 range on weekends depending on the season. After years of holding out, they added a resort fee in 2018 – it’s only $14.68 including tax per night, almost a bargain compared to the $45 plus tax per night fees at major hotels on The Strip, but still. The hotel’s proximity to the Las Vegas Motor Speedway probably means that race weekends will be sold out quickly and/or very expensive.

This is not the type of hotel that most Vegas visitors will think about for their trips. It’s too far from most of what you want to do and doesn’t contain the kind of must-see attractions that draw people to town. But for inexpensive rooms and a unique entertainment venue I still give this one my nod of approval. If everything on The Strip is too expensive, consider this as an alternative.