Steps from all the Center Strip action.

Cheaper than most in this neighborhood.

You feel like you get a lot for your dough.

Lots of options, newer are nicer.

Feels a bit crowded and haphazard.

Just about everything you need is on site.

The staff is very responsive and friendly here.

Have had more fun in other hotels.

Gotta give points for Bugsy. 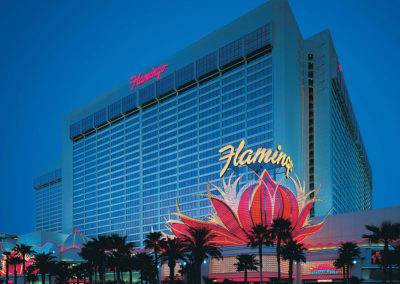 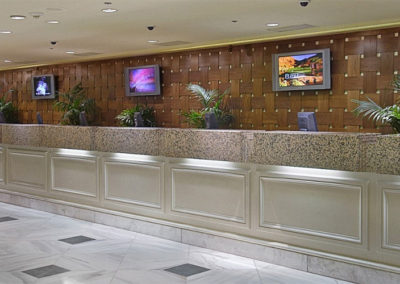 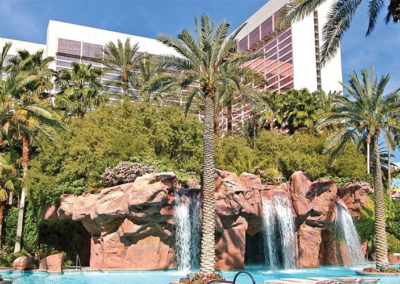 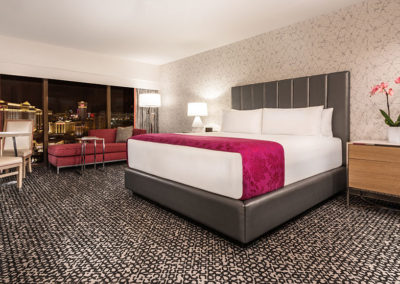 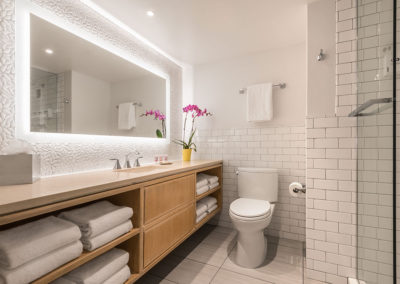 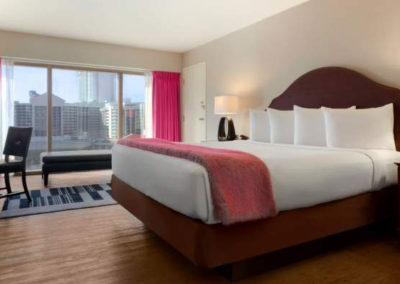 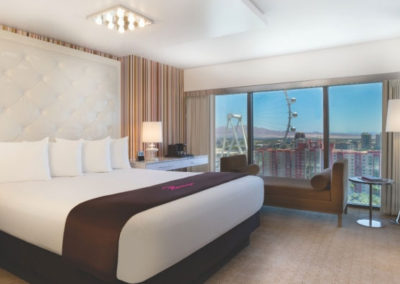 When The Flamingo opened in 1946 it was not, as is often reported, the first hotel on the dusty piece of desert that would eventually become ‘The Strip’. The first one was actually El Rancho, which burned down in 1960. But although it wasn’t first, it certainly was the most heralded – a million-dollar oasis for the rich and powerful built by legendary mobster Benjamin (Bugsy) Siegel.

Poor Bugsy wouldn’t recognize the place now. The last little bit of the original remaining structure was torn down in 1993 to make way for new construction. These days, The Flamingo is a huge, tropical themed palace – not a mobster or moll in sight. Oh well.

The glittering pink and orange neon façade is one of the most famous in Vegas and the casino area is a faux-tropical wonderland. The gaming area wanders and meanders throughout the property so there are lots of different sections in which to spend your money. The front part of the casino, just off The Strip, is brightly lit and heavy on the pink with lots of gaming tables, lower limit slots, and the high-limit slot area. The back part of the casino near the front desk is darker both in lighting and colors and is mostly slots.  Whether its because of new, bigger slot machines, the lower ceilings in the older parts of the hotel, the meandering layout, or just that they’ve tried to cram too much into too little a space, the casino feels crowded these days.

This is also one of the few places where you can still find relatively low limits on blackjack tables, although they are becoming more rare here as well. To be honest, this isn’t a place that I spend a lot of time gambling in but not for any good reason other than there are places that I like better. They do have a full spectrum of gaming options including slots of all denominations, all the usual table games, a race and sports book, and a poker room.

Rooms come in a variety of flavors.  The newest Flamingo rooms are done mostly in grey and white with bright splashes of their signature pink throughout.  They go with their vintage flavor by having old-school photos and decor touches but the rooms are modern with 55″ TVs and contemporary, albeit a little boring, furnishings.  Bathrooms are on the compact size but they have rain showers and good amenities.

Some of these rooms even come with a bunk bed option, with elevated twin bunks above the standard beds adding some extra sleeping space if you’ve got a big group wanting to split a room.

Older Fab rooms are similar in design but have faux-wood floors, which might not be all that special but are at least a unique touch.  The rest of the rooms are pretty much the same but the furnishings and decor are a little older so you might see more wear and tear.

Finally, the Go rooms, which have a retro flair.   Done with a big nod to the Bugsy Siegel era, the rooms feature decidedly retro décor with big white padded vinyl headboards, white built in desks and chairs that look like they time traveled from the 1940s, and full walls of white drapes (electronic no less) offset by vibrant pinks and deep browns in the wallpaper, carpeting, and accents. Flat panel televisions and high-speed Internet keep it modern so the overall effect is very hip. The bathrooms have frosted glass walls, a television built into the mirror, and modern fixtures, lighting, and amenities.  While fun, these are the oldest rooms in the hotel in terms of when they were last remodeled and you’ll definitely see signs of age.

Elsewhere is the pool that rivals The Mirage for the nicest in town. Dense tropical foliage frames the area and there are even live tropical animals including penguins and, you guessed it, flamingos. Get it?

There are several restaurants, a food court, a bunch of shows, and a health club.  Check the Related Reviews box below for things to do here at The Flamingo.

It’s difficult to pin down prices here – sometimes they are higher than they have any right to be, but when they are moderate this is really a hotel you should pay attention to. Note that there is a $37 per night resort fee for things like Internet and gym access and you also have to pay for parking here. It’s $24 per day for the valet and $12 to self-park.

Although the overall package still places The Flamingo in the second tier of hotel choices for me, this is a solid and dependable choice for mid-level accommodations that usually won’t break the bank.