Too dark and small for my tastes.

You can’t get a better location than this.

This is one of the most expensive hotels in Vegas now.

The luxurious trappings and excellent service feel worth it.

Also dark and small, with fewer options than the big casinos.

Rooms have everything you need and a lot you don’t.

One restaurant, a pool, and several clubs – that’s it.

Excellent from beginning to end.

Certainly more fun than it used to be.

Extra points for the reviving a classic. 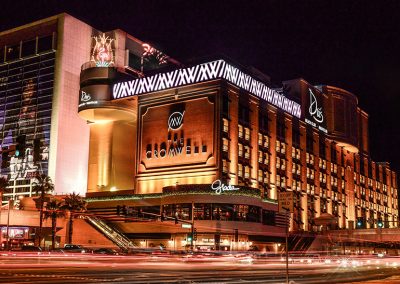 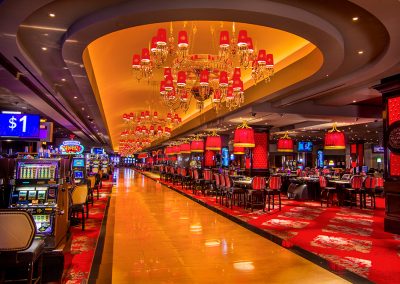 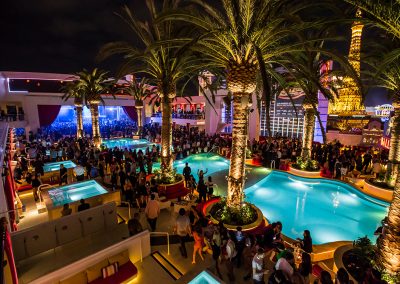 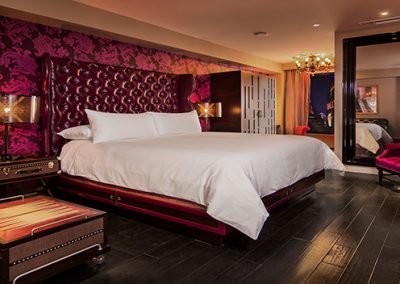 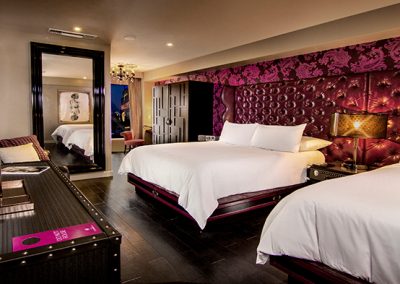 Originally opened in 1979 as the Barbary Coast, this small hotel was way past its prime during its incarnation as Bill’s Gamblin’ Hall & Saloon. It’s not that there was anything expressly wrong with it, but it had grown worn and a bit dusty (metaphorically speaking), a relic of an era of cheap hotels, $3.99 prime rib specials, and low wager gambling that Vegas keeps trying to put in its rear view mirror.

A $200 million renovation gave new life to the property, reinventing it as The Cromwell, a boutique luxury hotel with a sexy vibe, celebrity chef dining, the latest gaming tech, and decidedly not-cheap room rates. It is aiming to be an experience for people who want things intimate and luxurious; there are only 188 rooms, which makes it microscopic when compared to the 4,000 room behemoths next door.

The bulk of the building was gutted and revamped, getting rid of the Victorian era San Francisco theme in favor of clean, modern lines in the casino and a bordello meets industrial loft design in the rooms. About the only thing that survived the transition, other than the basic footprint of the hotel, are the original chandeliers in the casino, which were overhauled and updated. It’s a dramatic change from the Bill’s days and mostly a good one.

The main arrival entrance for guests has shifted to the back of the property along Flamingo Road with a new parking garage and porte corchere. Those driving should note that getting in can be a pain with the constant, often bumper-to-bumper traffic on Flamingo, but getting out is alleviated a little bit by an option to cut through the neighboring Flamingo hotel driveway to Linq Drive (formerly Audrie).

Just inside the doors is a gift shop selling the usual sundry store items (although not gum, for some strange reason) and some upscale but contemporary clothing, accessories, and more that try to express the feeling of the new hotel. It’s the only option for shopping on the property so those with an itchy credit card will need to go elsewhere.

A small lobby has a private check-in room for those who want to avoid the glare of the spotlight. There are only two positions at the main desk but with only 188 rooms, waits are usually minimal. Do the math – two agents checking in for 188 rooms versus maybe 10 at a place with 4,000 rooms.

The casino itself is tiny in comparison to the giants in Vegas – only 40,000 square feet. At only about 1/3 the size of most of the casinos on The Strip, a wide variety of gambling options is not on the menu but luckily the Flamingo casino is only steps away. There is a decent selection of slots, mostly low-limit, and tables plus a high limit area and a reservable, semi-private gaming lounge. They do offer some relatively rare, more player friendly games like single-zero roulette and 3-2 blackjack so that’s worth knowing about. The decor is nice, with a streamlined modern effect that is pleasant, although it, like much of the rest of the hotel, is dimly lit, lending a bit of a cave-like feel.

Go upstairs and things get a lot more interesting quickly. The elevator lobbies provide a strong statement, with funky mirrors, beautiful bordello-inspired settees, and readable carpeting. By that, I mean that the carpet has large printed statements woven into it, most of which encourages guests to relax and embrace a laissez faire attitude.

Because of the limitations of revamping an existing building, the hallways are narrow and have low-ceilings, but they have done a good job of turning that into a dramatic presentation with more of the “novel” carpeting, soft uplighting by the floor boards, and lighted panels by all of the doors. It’s dark and moody, which may not be to everyone’s taste but is certainly more memorable than most bland hallways in Vegas hotels.

Rooms also didn’t get any bigger, which makes them feel tiny by modern Vegas standards, especially considering how much stuff they cram inside. There’s a bed (or 2), a leather sofa or sectional, a chair, a chest of drawers with a safe and minibar, a massive 55″ television on the wall, an armoire, nightstands, a dressing vanity, and a small table on which they put things like backgammon sets or checkerboards. So yes, well-stocked, but it feels a bit overwhelming especially when you factor in the bold decor. It’s sort of a mix of a Parisian boudoir and a NYC loft, with hard wood floors, rich purple accents, antique luggage-inspired furnishings, and eye-popping, original photography of things like a naughty masquerade ball. Don’t get me wrong – I really like all of it – but I’d like it a lot more if it were in a room that was about 50% larger and with more natural light.

Regarding the latter, there is one small window that has an awning over it outside and the rest of the exterior wall space is taken up by the bathroom. You can decide for yourself if you think that makes the rooms feel cozy or cave-like. Try to get a south-facing room (even if it costs you a few extra bucks) otherwise you’ll be looking at a wall or the side of The Flamingo. This is less because of the view (go outside if you want to see it) and more about it being even darker in the rooms that face to the north.

Bathrooms are quite wee but well presented with a generous shower (no tub) featuring bold tiles with more words and phrases on them and both a rain and detachable shower head option. Both are mounted up high so adjusting them is going to be a challenge for shorter folks. I’m over six feet tall and I had to stretch to reach.

Rooms come equipped with the aforementioned minibar and safe, plus an iron and board, robes, and Wi-Fi included in the resort fee.

Pluses here include roughly nine million electrical outlets in convenient places so you don’t have to crawl under the nightstand to plug in your phone charger; a connectivity station for the massive TV so you can plug in your laptop; and lots of mirrors to check your ensemble.

It’s worth noting that there is no desk in these rooms so business travelers are going to have to put their laptops on the small dressing table. You can look at yourself while you type.

Dining and nightlife are the big focal points here, with a restaurant from Food Network star Giada De Laurentiis serving up her light Italian, Mediterranean, and California cuisine, and three separate party venues from Victor Drai. They include a rooftop pool club for daytime fun, an adjacent nightclub for after dark shenanigans, and a basement level after hours club to keep things going until dawn. That’s all there is on site – no buffet, no spa, no roller coaster – but all of that stuff is available at the surrounding hotels.

This focus on the nightlife angle (even during the day) brings a couple of downsides for the middle-of-the-road traveler. First, the clientele is young and rowdy on nights the club is open and they take over much of the hotel. They aren’t threatening in any way, just loud and obnoxious especially if you just want to sit at the 3 Card Poker table in peace. What is loud is the booming music from the open air nightclub on the roof, which goes until very late at night. This, combined with street noise, means the sensitive may want to bring ear plugs or a white noise machine.

Service is terrific throughout the experience with a higher-than-average staff to guest ratio providing personal attention at every turn. This is the kind of place where the front desk agents can do more than just check you into the hotel, they can provide full concierge arrangements. They go out of their way to make you feel pampered, which is great for most people but if you’re more of a “leave me alone I can do it myself” kind of person, this may be a bit overwhelming.

So with all of these upgrades from the Bill’s and Barbary era you might be expecting an uptick in the prices as well and you would be correct. Rates are starting at around $99 per night weekdays and $199 weekends and going up from there – sometimes way up. It isn’t unusual to see $200 weekday rooms and $300 weekends. Add in the $37 per night resort fee and you are squarely in Bellagio, Venetian, or Cosmo territory. My personal taste would direct me toward one of those bigger (and better lit) resorts but that’s just me. If small and intimate is your taste, you want a hotel in the middle of the action, and you want one with a casino, there really is no better option in Vegas.