MRS. MAISEL DOES VEGAS, BUT HOW ACCURATE IS IT? 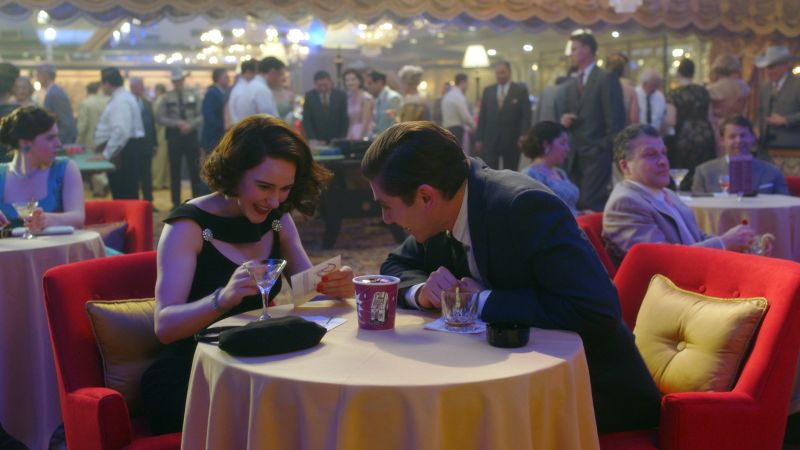 Fans of Amazon’s infectiously bubbly hit The Marvelous Mrs. Maisel and fans of Las Vegas experienced a confluence of passions as the third season of the show sent burgeoning standup comic Midge Maisel on tour, with the first stop in Sin City. The show, which is rightfully praised for its late 1950s/early 1960s period detail, pulled out all the stops to recreate the Vegas of the Rat Pack era with everything from vintage slot machines to visual shout outs to The Sahara, The Riviera, The Thunderbird, Glitter Gulch, and more. It was a neon colored delight that certainly captured the spirit of the times, but how did it do on the details?

As far as I’m concerned, creators Amy Sherman-Palladino and Daniel Palladino can do no wrong. As a longtime fan of shows like Gilmore Girls and Bunheads, I consider them to be TV gods, incapable of error. I also know that certain factual liberties are taken in the creation of fiction for reasons like time, budget, and even artistic choices. But I’m also a fan of Vegas and, more specifically, the history of the city and so I saw some stuff that, while I won’t call it “wrong,” may have been less “right.”

Midge, her manager, the singer she was opening for, and his band were all staying at the fictional Phoenician hotel and casino. While it is never precisely specified, the timeline seems to be early 1960 and the interiors of the hotel and casino, which were created at a Queens catering hall, are stunning and very accurate to the period. From the crystal chandeliers to the people, all dressed up for their night at the casino and the showroom, were spot on, although the set decorators probably devoted a little too much prime floorspace to the vintage slot machines in the Phoenician’s casino. At the time, slots were considered to be novelties, usually played by women, and were often relegated to the edges of the room while gaming tables took up the prime real estate. But that’s a very minor quibble.

It was when they went outside that things started to get murkier from a historical accuracy perspective. Based on the view out of Midge’s hotel room window, the Phoenician was located on The Strip just south of The Frontier with the Desert Inn across the street. That would place it where the Fashion Show Mall is now located, a pretty good choice since there was no casino/hotel there – it was part of the Frontier’s property and is where what is now known as the Little Chapel of the West was located.

The problems start to creep up if you look closely at that view. Yes, the Desert Inn was located directly across the street from The Frontier where Wynn Las Vegas now stands. But the hotel tower seen in the backdrop didn’t get built until 1963 and the mirrored glass exterior wasn’t added until the 1970s. Even worse, you can see a Sheraton logo on the tower, which didn’t go up until the hotel was bought by ITT Sheraton in the 1990s.

In the view from the window, there are several other towers visible further north of The Desert Inn when there only would have been two at the time – The Riviera’s nine-story main building built in 1955 and the Sahara’s 14-story tower added in 1959. The only other major property on that side of The Strip was The Thunderbird, and it didn’t have a tower in 1960.

Things get even more confusing when Midge and her manager Susie run outside to see her name on the Phoenician’s marquis. The background they use for this shot is Downtown’s Glitter Gulch, with properties like The Golden Nugget, the Horseshoe and the Hotel Apache, and the Boulder Club all right next door. That would mean that the Phoenician was somehow located both on The Strip next to The Frontier and along Fremont Street in Downtown Las Vegas, more or less where The Four Queens or The D are located now, which obviously isn’t possible. They most likely did this because it created really cool visuals that looked fantastic, but this is one of those places where they were a little less “right.”

Finally, we get to the most complicated part of Vegas’ history and how it applies to this story, the issue of segregation. The fictional singer Midge is touring with is Shy Baldwin, a black man who is probably comparable to Harry Belafonte, and most of his band, support staff, and manager are also black. In the show, they all stay at the Phoenician also and are seen in the casino, in restaurants and lounges, and other public areas of the hotel. If I’m right about the time period this is supposed to be, early 1960, Baldwin and his entourage wouldn’t have been allowed to stay there, gamble there, eat there, or even enter any of the public areas.

Famous black entertainers of the time including Sammy Davis Jr, Nat King Cole, Josephine Baker, and Ella Fitzgerald among others often performed in the showrooms on The Strip, but usually had to use service entrances and could only be on the property for their shows. Afterward, they would go stay at hotels in West Las Vegas, a neighborhood that was predominantly black.

This is where the legendary Moulin Rouge hotel and casino, the city’s first racially integrated property, gained its brief bit of notoriety. Opened in 1955, it drew major black celebrities and their famous white friends who wanted to drink and dance and eat together. It only stayed open for a few months, but its success during that time is what started to force changes on The Strip. Some hotels adopted slightly more lenient policies toward black entertainers but only slightly. There’s an infamous story about Lena Horne, who was allowed to stay at The Flamingo while she performed there but she wasn’t allowed to visit the restaurants or the casino and when she checked out, the staff burned the bedding on which she slept.

The official declaration of desegregation was negotiated by black leaders and casino executives in March of 1960 and from that point forward, people of color were technically allowed to visit any part of the hotel and casino that anyone else was, but it would be years before this was fully adopted and incidents of discrimination continued.

So, when Shy Baldwin and his crew are seen in what is most likely early 1960 comfortably integrating into the public parts of The Phoenician beside Mrs. Maisel, it might have been before Strip casinos were actually integrated and even if it wasn’t, probably wouldn’t have happened as easily and as drama free as it did.

The show is not about race so skipping this bit of period detail is understandable, but it’s interesting that when they all get to Miami a few episodes later, it’s mentioned that Baldwin and the other black people in the group aren’t allowed to stay at the Fontainebleau where Midge and Susie are. They don’t dwell on it, but I do wonder why they chose to do that accurately for a hotel in Florida but not for one in Nevada.

In the end, though, The Marvelous Mrs. Maisel is a fictional story set in an idealized version of the time period, where the dresses are always fabulous and the New York streets are always clean. If the creative team decided to forego a few historical details about Las Vegas in order to tell the story they wanted to tell in their typically smart, funny, and engaging way, then I can forego my Vegas-know-it-all nit picks and just sit back and enjoy it.

Except for that whole hotel on both the Strip and Downtown at the same time thing. That’s gonna continue to bug me.