Four thrill rides: The “Big Shot” a thing that shoots you up about 10 stories above the top of the tower and then drops you in a sickening bouncy movement (sort of a reverse bungee-jump); The “X-Scream” an open-air car that launches you on a teeter-totter style track over the side of the building; “Insanity,” a thing that hangs you out over the edge of the tower and spins you around at 40 miles and hour; and SkyJump, where you get to literally jump off the building (no, I’m not kidding; see below). There was a roller coaster but it closed in early 2006.

At the Stratosphere hotel and casino on the North Strip.

If this kind of torture sounds appealing to you, then yes. For the record, Big Shot, X-Scream, and Insanity are $40 for unlimited rides, and SkyJump is $119 and up.

The rides are closed often due to inclement weather (high winds, rain, etc.). 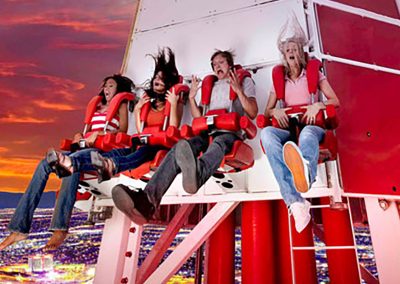 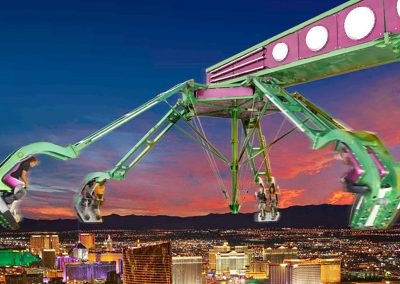 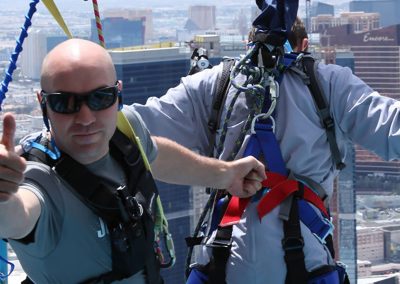 X-Scream, the thrill ride high atop the Stratosphere is an interesting dividing line for humanity. Basically, you can divide people into two groups: those that think plunging off the side of a 100-plus story building in an open-air car sounds like fun and those that think there isn’t enough money or illegal narcotics in the world to get them to even consider doing it.

I fall squarely into the latter camp. That camp is planted very firmly on the ground and I fully intend to stay there, preferably while sipping cocktails and watching cable television.

My friend Joe, however, is in the former camp and I got him to ride X-Scream for a view from the other side – one you’ll never get from me.

First, let’s discuss exactly what the ride is. It’s essentially a giant teeter-totter, perched (in my view) precariously on the side of the outdoor observation deck, 866-feet above the ground. You climb up onto a platform aimed toward the sky and get into one of the seats. A hydraulic restraining device pins you in around your waist – but there are no harnesses or other safety equipment around you to ruin the effect. The bottom and the sides of the platform fall away and you’re basically sitting in an open chair as the car is propelled at 30 miles-per-hour up the ramp.

As you speed up it, the teeter-totter action comes into play and the ramp tilts off the side of the building and you are now headed down toward open space, giving you the sensation that your next, rather unpleasant stop will be the big empty lot across from SLS Las Vegas (formerly the Sahara).

Of course it stops before that, leaving you dangling out in thin air, watching the traffic helicopters (if there happens to be any around) whirring around beneath you. There’s a “surprise” that I won’t ruin for those of you who might want to ride the thing and then the ramp resets and you do it again.

So my view from the camp remains that I would never, ever, under any circumstances even consider riding this thing unless, perhaps, someone was chasing me with an axe and the only escape was somehow found on X-Scream. Our host took me onto the ride before it started to show me how everything works but I can’t really tell you what he said because just being out there on it filled my head with this loud buzzing noise that drown everything else out.

However the view from the “yeah, that would be fun” camp was different and somewhat surprising. Joe came off the ride a bit disappointed, feeling that there wasn’t enough thrill in the thrill ride. He said that it didn’t go fast enough or extend far enough off the side of the tower to get the desired effect.

Interestingly, I’ve checked around for some other opinions and found that human dividing line has created an interesting quandary for X-Scream. The unrepentant thrill junkies that want to ride something like this don’t think it’s thrilling enough and the big “scaredy-cats” like myself who may find it thrilling enough won’t get on it in the first place.

I have found several “testimonials” from folks who say the ride is a heart-stopper, with one online “blogger” saying she couldn’t speak or walk for ten minutes after the experience. So reactions may vary, to say the least.

If you’re in the camp of people who think something like this would be cool, I say go ahead and do it. It seems like a worthwhile gamble to find out for yourself if the X-Scream can make you scream.

Those of you who have been reading my column for awhile know that when it comes to thrill rides I’m a big wuss. You want to go on the New York New York Roller Coaster or ride the X-Scream on top of the Stratosphere? That’s fine, you go have fun. I’ll be in the bar. I think you’d have to be crazy to want to ride one of those contraptions.

But it takes a special kind of crazy to want to ride this particular thrill ride atop the Stratosphere Tower. In fact, the ride is so crazy they called it Insanity: The Ride.

You need to see it to believe it. You remember the Octopus rides at your local carnival? Arms extend with cabs at the end that go up and down as it twirls. This is the same basic concept only with open seats instead of enclosed cabs and you’re 900 feet in the air while you’re spinning around at forty mph.

I, and other right-minded folk like myself, will be watching from our comfy little camp on the ground. Where’s my cocktail?

As a man of a certain middle age, I have learned much about myself and have come to a certain level of acceptance about my abilities and talents. For instance, while I have a certain amount of intelligence that allows me to function in society I will never be a contestant on Jeopardy. I am not an unattractive man, but I have accepted the fact that I will never be asked to model underwear for Calvin Klein. And while I possess fortitude and a measure of bravery when it comes to challenges in my daily life, when it comes to things involving heights I am the biggest chicken in the world. Seriously. High things turn me into a quivering mass of jelly and sometimes there is weeping involved.

I give you this as context so that you will understand my answer when the very nice man at the Stratosphere asked me if I’d like to jump off the top of the building. In my head that answer was a polite “no, thank you” but I think it came out something like “there is not enough money or illegal narcotics in the world that would ever make me even consider doing that.” There may have been hysteria involved as well.

SkyJump is the most extreme of the thrill rides at the Stratosphere, giving people with much more bravery (or perhaps mental illness) than me the opportunity to literally jump off the top of the tower. Why anyone would want to do this is beyond me, but if you do now you have your chance.

Jumpers are given instruction by their certified Jump Masters on the ground level (oh blessed, blessed ground). They are put into jump-suits and told to tie their shoes really, really tight because apparently they have the inclination to fly off your feet as you are plummeting toward earth. If you can’t tie them tightly enough, they’ll tape them to your body. It all disturbed me, but that gave me the proverbial “willies.”

Then the crazy people are taken to the 108th floor of the tower to a glass room where another Jump Master checks all of their safety harnesses and equipment before they are escorted outside to a tiny little platform approximately 830 feet above the landing pad. A cable is attached to the jump-suit harness that is attached to two guide wires that run from the platform to the ground, which help to ensure that the high winds that are often a feature of Vegas don’t blow you into the side of the building I guess.

A third safety check is performed and then… you jump.

This is not a bungee or a free-fall. Instead that cable attached to your back controls the descent, which can reach speeds of up to 40 mph. Whether you go down face first or feet first is up to you and whatever God you worship, but regardless you come down really fast – heart-stoppingly fast – and don’t slow down until you are about 20 feet above the landing pad. The whole thing takes less than 15 seconds.

I talked to a lot of people who did it and they all report that it is the most thrilling, exciting experiences of their life, giving you the sensation of flying. They say thrilling and exciting, I say no way in hell. Potato. Potahto.

The cost of that 15 seconds of thrill is $119 and you can pay extra for things like a DVD, photos, or a t-shirt. Second jumps are discounted if one time was not enough crazy for you.

Note: there are weight and age restrictions and the ride is shut down during inclement weather and if winds are too high for the guide wires to keep you on course.