Hard to get further away from The Strip.

Lots of choices if you are a low-limit gambler.

A nice place for the north side locals. 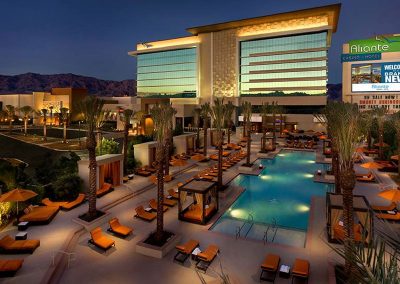 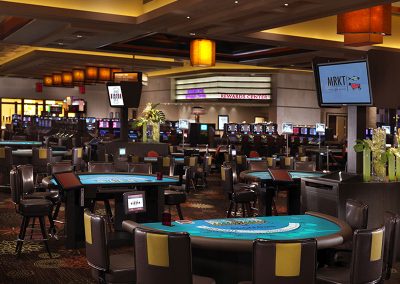 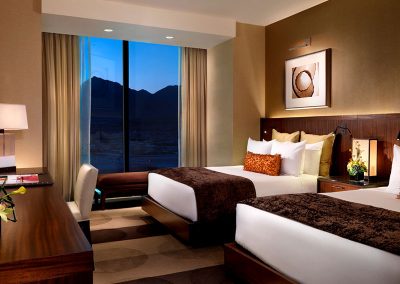 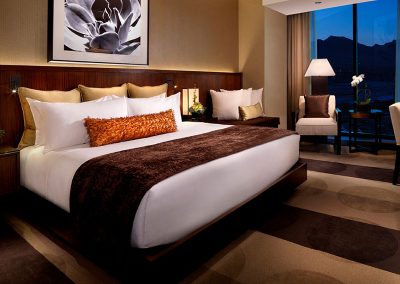 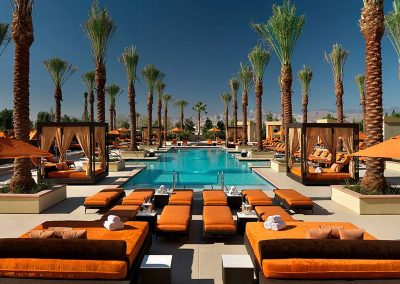 Originally built and run by Station Casinos, the folks in charge of Green Valley Ranch, Red Rock Resort, and others, this small casino hotel was designed to cater not to the average Vegas visitor but to locals and to folks going to the races at the nearby Las Vegas Motor Speedway. The property is not associated with Station Casinos anymore, but it may still be worth a trip if you have a rental car at your disposal because Aliante Hotel and Casino offers a lot of what people complain doesn’t exist anymore: fashionable but affordable fun.

The town of Scottsdale, Arizona keeps coming up in discussions of the overall design scheme. Think clean and simple lines, lots of earth tones, and extensive use of natural stone, wood, and fibers to give it a desert resort feel.

The designers at Aliante have gone the extra mile to put forth a visual feast everywhere you look. There are no blank, boring walls here. Everything has a texture, a pattern, and a richness that you don’t expect to find in hotels that aren’t on The Strip and that don’t cost $400 a night to stay in. Even the ceiling in the casino has a funky feel to it that makes it look like the tiles are falling.

The smallish lobby is a cool, sand and stone beauty and can be accessed from its own valet parking, which if you’re checking in should be used because the one and only parking garage is at the far opposite end of the property. If you are casino averse, why are you coming to Vegas? But at least here you could check in and go to and from your room without ever seeing a slot machine.

The hotel has 202 rooms ranging in size from 400 square feet to more than 1,000 for the luxury suites. Each room features a flat panel television, iPod docking station, CD player, high-speed Internet, minibar, and all of the usual amenities you find in Vegas rooms like hair dryers, irons and boards, and the like. The decor is sleek and modern like most newer Vegas hotel rooms with liberal use of dark wood, soft lighting, and very comfy furniture.

If you’ve gotten used to the size of the expensive rooms in Las Vegas, these might feel a little small but for most people it is more than adequate and bigger than many of the rooms on The Strip that cost twice as much.

King rooms have a little daybed tucked into the corner that is a nice touch.

The bathrooms are not very big either but have more than enough floorspace for one individual. Most have only showers so if you’re looking to soak in the tub, get a suite or go elsewhere.

Rates start at around $69 a night, which is crazy cheap for any room in Las Vegas much less one this nice. Weekdays wil rarely go over $100 and weekends will usually max out at around $129. There is a $31.63 (including tax) nightly resort fee covering things like Internet and gym access so keep that in mind when looking at the low prices. Parking is free.

The casino features more than 2,500 slot machines, most multi-denomination (pennies and up) and many that are multi-function so you can play a bunch of different games without having to move. High-limit players will be limited in their choices as there aren’t too many dollar and up machines.

More than 40 table games run the gamut from blackjack to baccarat and there is a complete race and sports book and a bingo hall.

There are serveral restaurants (including a food court with a Capriotti’s), a buffet, bars, lounges, a 600-seat showroom, a 16-screen movie theater, and a small video game arcade. There is a large pool area and a spa.

Service is as local-hotel friendly as you’d expect. Everywhere I went I got smiles and greetings and I spent hours at a three-card poker table not because I was winning but because I was having so much fun with the dealer.

Aliante is in North Las Vegas. To get there from The Strip you would hop on I-15 and go north about 13 miles to the I-215 Beltway, which for those in the know is the exit right before the Las Vegas Motor Speedway. Then you take the beltway west about 8 or 9 miles to Aliante Parkway – the hotel is just off the freeway. Another option would be to take I-15 to I-95 near Downtown then take I-95 north to the beltway and go east several miles. There are surface street options as well that I won’t bore you with here.

But the bottom line is that if there is no traffic the hotel is a solid 20-25 minute drive from The Strip. But of course there is ALWAYS traffic in Las Vegas so you can figure to double that on most days. Going there on a Sunday night from The Strip took me about 20 minutes and coming back in late morning Monday rush hour took more than twice that.

That’s a barrier that most tourists won’t be able to overcome. But those that do may find some rich rewards.

Recommended for: People who want nice digs at affordable rates.

Not recommended for: People who don’t have a car at their disposal and/or don’t want to drive to get to the good stuff in town.