It can be very expensive to stay here.

Right in the middle of the center Strip action.

One of the most expensive hotels in Vegas.

Costs a lot but you get a lot for your money here.

Beautiful, luxurious, and most are very large.

Rooms are completely stocked with everything you need.

One of the best staffs in all of Las Vegas.

It’s easy to have a lot of fun here at Caesars. 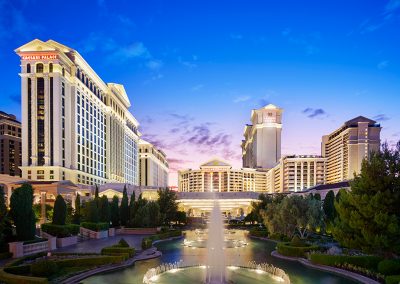 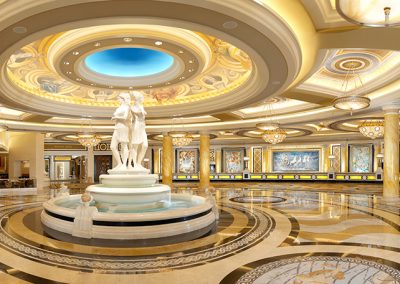 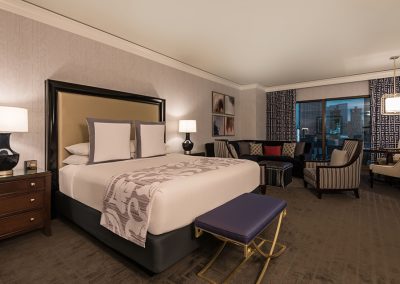 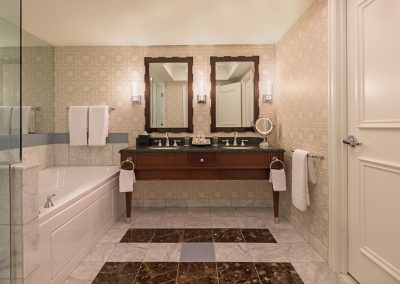 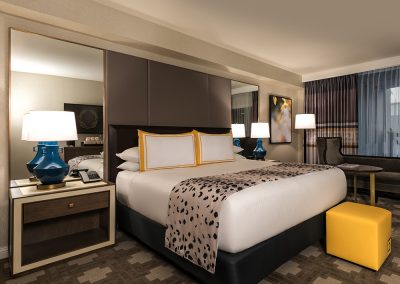 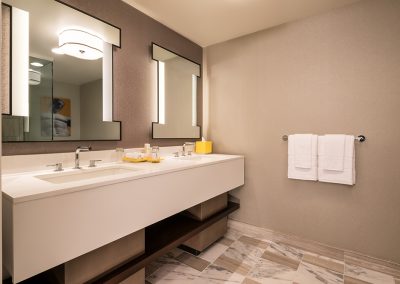 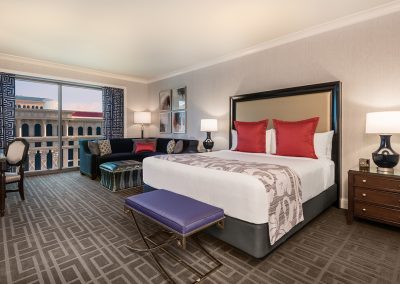 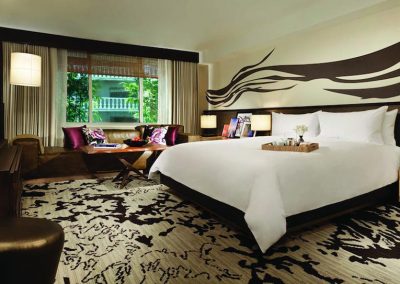 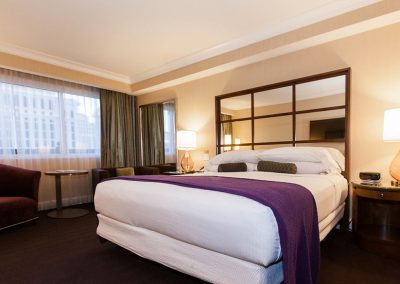 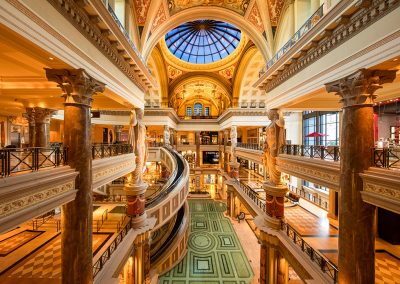 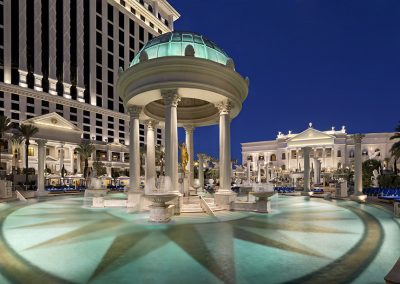 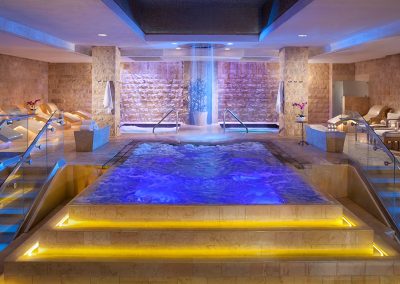 When Caesars Palace opened in 1966 it was THE place to see and be seen. Its audacious Roman Empire theme was great silly fun; the ultimate in tacky Las Vegas glamour.

These days, more than 50 years later, the kitschy glitz has mostly been replaced with upscale luxury but there are still plenty of ornate columns, colonnades, statuary, paintings, and toga-clad models walking around to give you some great photo opportunities. It really is one of the most visually stimulating hotels in town.

If you’re driving in, you’ll have plenty of time to admire the Caesars scenery as you hike from the parking garage to the registration desk. The fact that they don’t have sherpas standing by to help you make the ridiculously long trek through the casino laden down with luggage seems like a missed opportunity. Yes, you could use any of the four valet parking options, some of which get you closer to the lobby, but those are often “full” and restricted to guests and/or the upper echelons of the players’ club strata.

And this being a part of the modern Vegas means that yes, you have to pay for parking. It’s $30 per day for valet $15 for self-parking.

If you are going to be a guest, there are plenty of different room towers, each with its own personality and price point.

Let’s start with the Forum Tower. It’s one of the oldest parts of the hotel but the rooms have gotten modern makeovers that, while simple, keep them competitive with other upscale hotels in town. Furnishings and fixtures are sleek and contemporary and the amenities list is long including a flat screen television, cordless phones, a mini bar, power operated drapes, a safe, iron and board, and more. The bedrooms and bathrooms aren’t huge but they are perfectly fine for the average Vegas visitor.

The next step up is the Palace Tower, where you can get rooms in either the Deluxe or Premium formats. Both are bigger than the Forum Tower accommodations, with enough room for a small sitting area with a couch and chair plus very large, marble-lined bathrooms that include over-sized spa tubs. Premium rooms have even more floor space plus two bathrooms that are connected by a dual shower stall.

The Augustus Tower is a bit higher on the Caesars food chain. These giant 600 square-feet digs feature plush couches, a table and chairs, a writing desk, a sleek dark wood wall unit with a mini-bar, a flat panel television, and a bathroom big enough for the gods complete with a whirlpool tub, separate shower, and plenty of marble. Recent upgrades include L-shaped sofas and lamps with both electrical sockets and USB charge ports at their base so you don’t need to go moving furniture to plug in your phone at night. The beds are silly comfortable and the entire room gives you a feeling that you are staying someplace special.

One request you might want to ask for as you are checking in: try to get a room on the south side of the Augustus Tower so you can have a fantastic view of the Fountains at Bellagio.

The top of the pecking order is the Octavius Tower. The rooms themselves are very similar to those in the Augustus Tower – large, elegantly appointed, and comfortably modern – but with a bit more of an intimate feeling due to the darker color schemes and warmer lighting. I like the decor better here but actually prefer the Augustus Tower because you can get better views and it’s not as long of a hike to get anywhere you want to go.

The original Roman tower, dating all the way back to 1966, has gotten a top to bottom makeover with completely updated decor, furnishings, fixtures, and a name – the Julius Tower. Rooms here are done in chocolate browns with splashes of yellow and everything is comfortable yet stylish. While the views may not be as spectacular or the rooms quite as big as in the Augustus tower, they are a lovely way to spend a weekend. Bonus points for the accessible plugs and revamped bathrooms.

There is one more tower but it operates as its own property. The 1970-era Centurion Tower has been converted into a boutique hotel within the hotel and rebranded as Nobu Hotel Caesars Palace, after the popular Asian fusion restaurant of the same name that was added at the base of the tower. The 180 rooms got a Japanese makeover and runs independently of the main hotel with its own check-in and staff. Visit the Nobu Hotel page for more information.

The casino and the rest of the public areas encompass what seems like more square-footage than it actually does. The years of adding on to the property have made this one of the most rambling, most confusing gaming areas in town. I have gotten lost more than once but now have visited so many times that I know all the quickest routes from one side of the property to the other. Here’s one: if you are staying in the Octavius Tower and heading toward the Colosseum (which seems like the equivalent of walking from Rome to Venice), take the back hall past the buffet and then cut through the Appian Way shops. You’ll save yourself a bunch of time and footsteps.

The good news about that rambling layout is that there are lots of options for gaming spaces. The main table area near the lobby is under a dome that dates back to the very early days of the hotel. Adjacent on both sides are some slots and video poker including two different high limit gaming spaces. On the other end is a big space with high ceilings and soft lighting near the Colosseum that includes more tables and a lot more slots (including the bulk of the penny and nickel machines. There’s also a huge sports book if you feel like betting on the ponies.

Of course, I’d be remiss in not mentioning the Colosseum – a 4,000-seat showroom currently featuring big concerts from big name acts including Mariah Carey, Reba McEntire, Brooks & Dunn, Sting (starting in 2020), and others. If you get a chance to see a show there you should – it’s a nice room even if its not quite like being in Rome.

Speaking of entertainment, don’t miss the deliriously profane Cirque-style show Absinthe, which plays in a domed structure out in front of the hotel.

There are nightclubs including the gigantic and gigantically popular Omnia, the adjacent Roman Themed “shopping experience” The Forum Shops, and about a bazillion restaurants. Check the related reviews section of this page for more things to see, do, and eat here.

The pool area is among the most beautiful in town. The Garden of the Gods features eight pools, each with their own style and attitude. One is just for VIPs and overlooks all the others, another gets a lot of sun, a third doesn’t get much, one features swim-up blackjack, and one has a covered colonnade in the center for cooling off. Like I said, choices are good. Adjacent to this is a spa, which among the usual suspects like massages and workout equipment, has a full-service salon, Zen meditation garden, and a rock-climbing wall.

Caesars Palace of yore and of recent is truly a glorious place but what price glory? A lot. I suppose the planets may align themselves in such a way that you might be able to swing a room here for around $100 a night on a very slow weekday but only if they are truly desperate for boarders. Normally you’ll be forking over at least $150 a night on weekdays and a minimum of $200 on the weekends and often well over $300. And of course that’s before you get to the $45 per night resort fee to cover Internet, calls, fitness center access, and the like. So take that into account when looking at their already high rates.

Caesars has created a blueprint for how you can keep an older hotel not just alive, but thriving. Long live the empire!