Prices can be very high here

Lots of bang for the bucks.

Top of the line.

No casino, but points for Mandalay Bay down the hall.

Everything at Mandalay Bay is steps away. 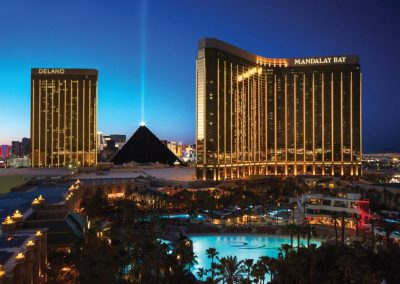 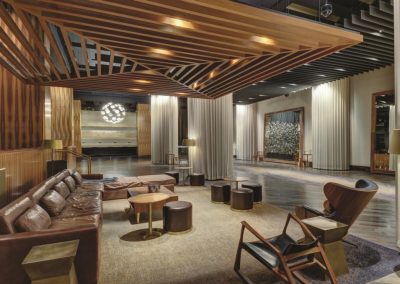 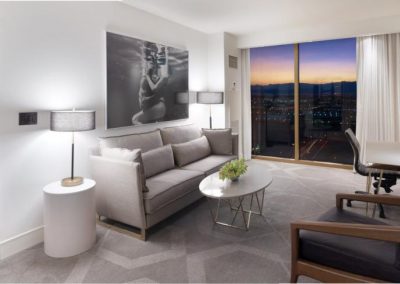 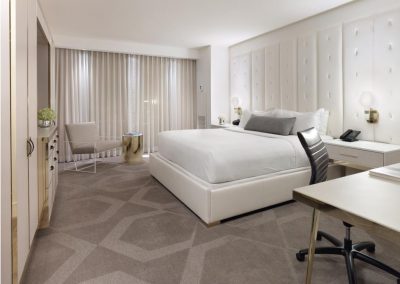 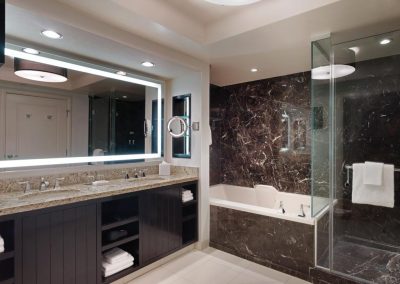 When THEhotel opened in 2004 a lot of people made fun of THEname. Mostly me. Come on, you have to admit it was a bit silly.

It only took about a decade but the name finally changed. In 2014, THIShotel became the Delano Las Vegas, a sister to the very popular, very expensive, very upscale Delano Miami Beach. Delano was originally supposed to come to Vegas at Echelon, the complex of hotels that was to replace The Stardust, but that project died and the company decided to go elsewhere.

The deal is strictly a licensing one – The Delano is still an MGM Resorts property, managed as a part of Mandalay Bay, the megaresort to which it is connected. But the Delano aesthetic that emphasizes a fun, social, upscale experience is in full effect here from the moment you enter to the moment you lay down and beyond.

The 64-story tower still operates as its own entity, complete with a separate entrance and check-in desk, its own elevators, its own restaurants and lobby bar, its own spa, and its own valet parking. If you wanted you could stay at The Delano and never step foot in Mandalay Bay.

Of course if you do choose to wander down the long hallway to the Bay you have a massive casino, more restaurants, shops, and entertainment waiting for you. A warning though – to get there you have to pass the showroom so try to avoid it just before and after show times so you don’t get caught in the crush.

THEhotel was done in a stark black, white, and tan color scheme in the public areas. The Delano decor scheme is more subtle Miami Beach, with lots of white mixed with some desert earth tones and lots of emphasis on natural elements. See those two giant sandstone rocks in the entryway from the parking structure? They are from the desert near Jean, Nevada and are estimated to be 150 million years old.

Inside they have carpeting that is meant to evoke the Colorado River, a sculpture with hanging rocks, white sheers on the support columns, candles that come out in the evening, and mood music that changes as the day progresses. They even do things like change the fragrance in the air based on the time of day (mellow in the day and more energetic at night) and write cute, empowering sayings on the mirror just outside the elevator bay to give you a little pick me up as you head out to face the Vegas madness.

On the main level there is a coffee bar that serves up all sorts of exotic blends (and some standard ones also), a breakfast/lunch only restaurant called Della’s Kitchen that focuses on upscale farm-to-table offerings, and a multi-level bar/lounge called The Franklin with lots of cozy seating, a fireplace, a DJ booth, and some cool lighting that evokes fireflies in the night sky. It’s a fun and funky space that would actually make me consider relaxing in a hotel lobby, something I’m not usually prone to do.

The Bathhouse spa is still there and they made only a few changes to the menu and decor, which is good because it was already a stunner. The eye-popping space has lots of reflecting pools and waterfalls tucked into surprising places creating a coolly tranquil ambience. They offer the full range of services alongside the usual hot tubs and saunas so if you need to pamper your cares away this seems like a really good place to do it.

Or if you need to sweat your cares away there’s also a fully equipped, high-tech workout room with all the latest treadmills and exercise equipment. I still don’t understand why anyone uses these in Vegas but if you do, you’re a better person than I am.

The restaurant and lounge at the top of the tower are overseen by Chef Alain Duccase. The former is a version of his award-winning Rivea that is hugely popular in St. Tropez and London, serving French and Italian cuisine. The latter is Skyfall, with huge windows and an outdoor patio offering some pretty stunning views of Vegas.

The 1,117 suites in the Delano have the same footprint as they did when it was THEhotel, with a formal two-room suite including a living room and separate bedroom plus a full bath and a guest bath. The earth tones continue here but lighter, with more cream and tan giving the space a brighter feeling than they used to have with the dark browns that dominated. In the living room is a couch, a chair, a big desk with plenty of outlets and a connectivity panel for the 46″ flat screen, a wet bar with a coffee maker, a mini bar with room to put your own items in it (at no extra charge), and more. The bedroom has a massive, tufted leather headboard that takes up most of the wall plus more comfy furniture, another TV, and a closet.

The bathrooms are marble affairs – big with a separate tub and shower and lots of high-end spa amenities.

And of course you’ll find the usual lineup of niceties including a safe, iron and board, Wi-Fi included in the resort fee, and more.

Of course all this luxury doesn’t come cheap. Weekday rates are usually in the $150-250 per night range and weekends start at around $300 and go up from there (sometimes over $500), and that’s before you include the mandatory $39 per night resort fee. Yes, you can sometimes get the rooms cheaper here but that doesn’t happen often.

And don’t forget about the fees for parking that were instituted in 2016. It costs $15 per day for self parking and $24 per day for valet for hotel guests and non-guests alike. The only way to get out of it is if you have a players’ club card at the Pearl or above level, which gets you free self-parking and the Gold or above level, which gets you free valet.

That’s a heck of a lot of money to pay when you could probably get something next door at Luxor for a quarter of that. Whether or not it’s worth it is a decision I can’t make for you, but I’m inclined to say that if you want to pay these kind of rates there are very few hotels in this town that do what they are doing as well as they are doing it.