Can be expensive to stay here.

Center Strip location means you’re in the thick of things.

A moderately priced option on the Strip.

Parisian village theme is a lot of fun.

Rooms have all of the necessities and many niceties.

This is one themed hotel that does it right.

A good hotel that is staying competitive. 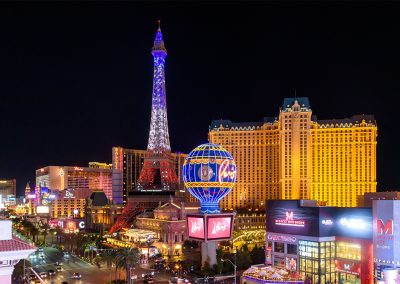 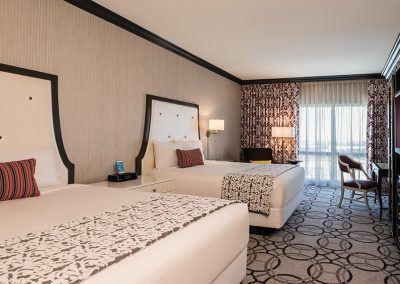 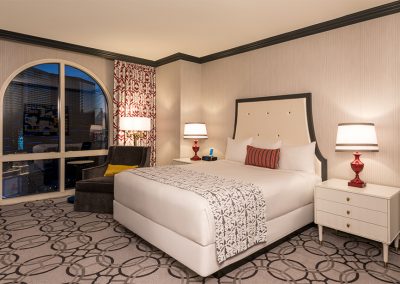 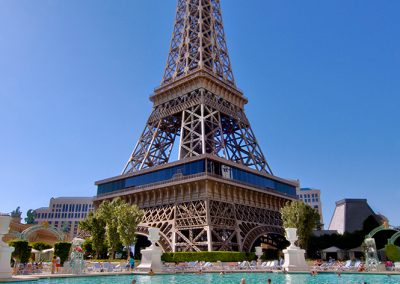 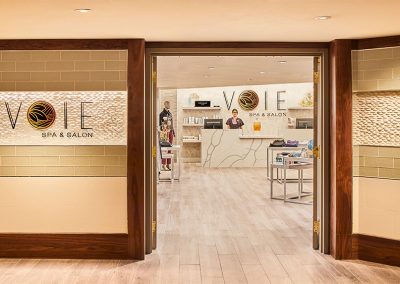 Paris was one of the few hotels that opened in the late ’90s that could be described as “instant hit.” While many of the other mega-resorts stumbled out of the gate and took awhile to catch on (Venetian), Paris was immediately popular with just about everyone, including myself.

The concept is nothing new: take a scenic city, country, or locale and recreate it in the Nevada desert. It’s been done with Rome, New York, Venice, Egypt, New Orleans, and on and on. But from the massive Eiffel Tower replica to the cute little French filligree around the hotel, this place stands above the pack with nice touches and inspiring detail.

Of course the centerpiece of Paris is the Eiffel Tower replica, soaring some 50 stories above The Strip. In 2019 they added $1.7 million worth of lights that make it burst with color every 30 minutes after dark.

As you pull in to the main drive you are greeted by a row of fountains leading to a faithful recreation of the Arc de Triomphe.

The casino area is surrounded by a Parisian village façade so you feel as though you are wasting your money in a park in the heart of the city. The ceiling is even painted to resemble the sky, lending to the feeling of openness. The turn of the century setting lends an air of romance and elegance that are probably missing from the real city at the turn of the millennium. When you come here you have to take some time to notice the little things like the ornate cherub statuettes holding up the light posts. Also notice the big things like the legs of the Eiffel Tower, which extend into the casino through the roof. They built the tower first and then built the casino around it.

Once you register in the ornate white marble lobby, it’s a short walk alongside the casino to the elevators.

While there used to be a variety of styles and decors, now there is one unified “Burgundy” room. It has simple furnishings done in a palette of white, gray, and burgundy (hence the name), and while it has a vaguely French look to it don’t worry about it being uncomfortable antiques. Everything here is designed for comfort and the amenities list is long – a full-sized desk, a 55″ TV, in-room safe, iron and board, and more. Bathrooms are simple and not the biggest you’ll find in town but they get the job done and have lots of elegant marble touches to make it feel more elegant than it probably is.

If you can swing it, get an “end of the hall” room, which is a little bit bigger. If they make you pay extra for it, pass… it’s nice but not worth an additional outlay of cash.

Back downstairs you’ll find a host of entertainment and dining options scattered around the casino and through the French village themed shopping arcade plus a nightclub and a showroom. Check the related reviews below for a few of the things you can do at Paris.

There’s also a pool and spa on the roof above the casino. It’s a little too plain and expansive for my tastes but there is something about sipping a cocktail on a lounge chair at the base of the Eiffel Tower that is undeniably appealing.

Oh and of course there’s the Eiffel Tower itself. If you can handle the stomach churning ride in the glass elevators up to the top of the thing you won’t find a better close-up view of The Strip anywhere in town. It’s also a great vantage point from which to watch the Bellagio Fountain show across the street.

As far as service is concerned, everyone here in my experience has been friendly, attentive, and forgiving of people who lock themselves out of their hotel rooms. Thank you Paris security.

In terms of price, this has become a medium-tier hotel – cheaper than your Venetians and Wynns but usually more than other themed places like Excalibur and Luxor. Although you may occasionally see a weekday rate of under $100 the more common is $100-$200 with weekends usually in the $200 and up range. When looking at rates, don’t forget about the $37 per night mandatory resort fee and $24 per day valet parking or $12 per day self-parking charge that are added on top.

I personally loved the theme hotels era of Las Vegas, which to me represented the city at its deliriously wacky peak. That they have kept the theme evident here at Paris Las Vegas with updates to keep it modern and competitive is a reason to say, “tres bien.”