Great design, lots of stuff to do, inexpensive for Vegas.

Resort fee, expensive for Downtown, what’s up with that green in the rooms?

Downtown, about a block off the Fremont Street Experience.

Cheap for Vegas but a little pricey for Downtown.

They look nice… except for that green.

On the small side and maybe too much low-limit. 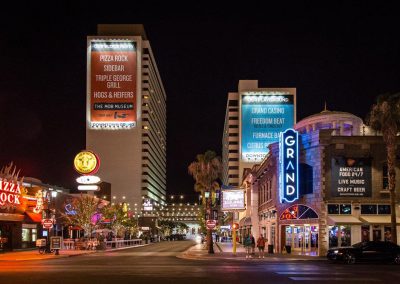 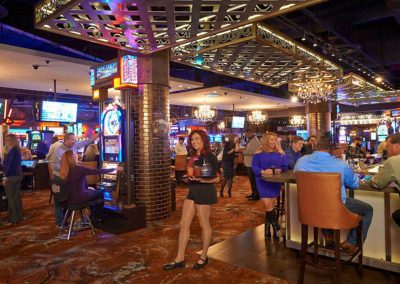 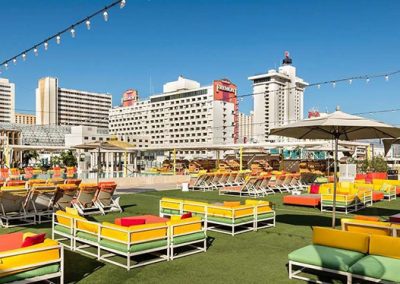 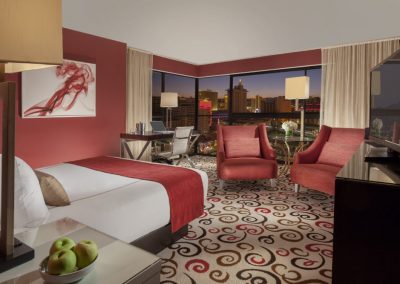 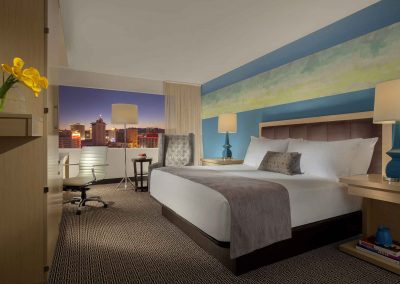 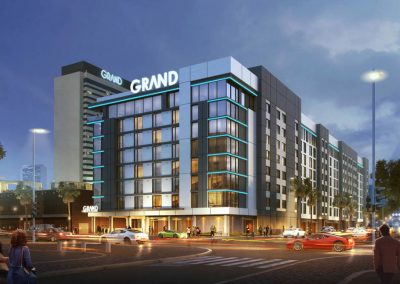 Is the resurgence of Downtown Las Vegas a revolution or an evolution? One look at the Downtown Grand and you may be forgiven for thinking it’s a little of both.

The hotel once known as the Lady Luck closed in 2006 with promises from the then owners that it would be reborn within the year as something bigger, brighter, and better. It took more than seven years, and a completely different set of owners and management, to get the old gal back up and running, but it is back in both a familiar and uniquely original package that keeps the good stuff about Downtown and turns the rest on its head.

The property is spread across two blocks of Downtown Las Vegas on either side of 3rd Street between Ogden and Stewart. As a point of reference, this is a block north of the Fremont Street Experience and right across the street from the Mob Museum. They call this area Downtown 3rd, just in case you were looking for one more neighborhood moniker to add to your collection.

The main part of the complex is on the east side of 3rd Street and features the casino, a rooftop pool and recreation deck, multiple restaurants and bars, the lobby, a sundry shop, and one of the two hotel towers. The other tower is located on the west side of 3rd Street, connected by an overhead walkway. The building is adjacent to the strip of businesses that includes Hogs and Heifers, Triple George Grill, Pizza Rock restaurant, and more, all of which are considered to be part of both Downtown 3rd and the Downtown Grand ultimately.

The design is funky retro modern industrial chic, a phrase I just invented to cover the disparate yet wonderfully complimentary decor elements in the public spaces. It’s got exposed brick and ductwork, giving it the industrial vibe, plus beautifully done wood and metal work and iron and crystal chandeliers adding the chic element. The furnishings have a distinctly “Mad Men” era vibe to them but all done in a contemporary mold. It feels both comfortably yesterday and totally today at the same time, furthering fueling the revolution versus evolution debate.

The casino is small by Strip standards – about 35,000 square-feet – but one of the biggest in Downtown, falling in between Main Street Station and Golden Nugget in terms of floor space. It’s basically one big room with a big center bar; lots of slot machines that are mostly of the penny, nickel, and quarter denominations; a handful of gaming tables covering all the basics at low limits; a small sports book; and two small high limit areas, one with about a dozen dollar and above slots and the other with a couple of blackjack tables. It isn’t a destination casino in terms of its offerings but it is a really nice place in which to gamble, especially if you are sitting in what has to be the nicest, plushest gaming table chairs in all of Las Vegas.

There are several restaurants both inside the building and right outside of it along 3rd Street so finding sustenance is not going to be a problem.

In addition to the big bar in the middle of the casino called Furnace, there’s also Art Bar just off the lobby, with framed paintings on the ceiling and little exhibits spread around the small room.  The former “Mob Bar” has been turned into a small showroom hosting comedy and other low-cost shows.

The pool area, branded Citrus Grand, is the best in Downtown Vegas by far and one of the coolest in Vegas period. It is located on the roof above casino and features a huge infinity pool, grassy areas for lounging (and picnicking, I suppose), fire pits, VIP cabanas, a cafe, a bar, and room for concerts and special events like movie screenings. It’s gorgeously done in bright green and pristine white and couldn’t be more appealing if it tried.

There is a small fitness center with a handful of treadmills but no spa.

The rooms come in several different configurations. Deluxe rooms are 350 square feet and feature one or two queen beds, a 40-inch flat screen, high speed Internet, a docking station/alarm clock, and pillow top mattresses. The decor is more of that retro modern funky, done in an eye-searing shade of neon green that doesn’t glow in the dark despite its appearance. Premium rooms are done in slightly less shocking red and have 450 square feet, a 46″ TV, and slightly larger bathrooms. A variety of suite configurations go up the chain from there.

They are supremely comfortable and well-appointed but are the types of rooms that you will most likely mainly want to sleep and bathe in as opposed to lounging around in. The bathrooms are small and fairly simple but get the job done although it’s worth noting that some rooms have only showers – no tubs. If that’s important to you be sure to mention it when you book.

A new 495-room tower is under construction now where the valet parking entrance was and will have more modern digs debuting in 2020.

Prices go as low as $30 per night for the deluxe rooms during the week and $119 on the weekends and although it certainly goes higher, you’ll rarely pay more than $100 weekdays and $200 weekends. Premium rooms running about $20 more per night. That’s not including the $29.36 (incl. tax) per night resort fee that includes Internet, bottled water, local and toll free calls, morning coffee at one of the restaurants, and a coupon book.

A comfortable package, lots of dining and entertainment options, a low-limit casino, a funky and modern design, a luxurious atmosphere, friendly service, and reasonable prices. Put all that in the proverbial blender and what do you get? Both a revolution and an evolution, I think. Whatever you want to label it, if I was going to stay Downtown this is where I’d want to be.