Hard to do better than this.

You get your money’s worth.

Rooms have everything you need.

Everything except for a showroom.

It just keeps getting cooler. 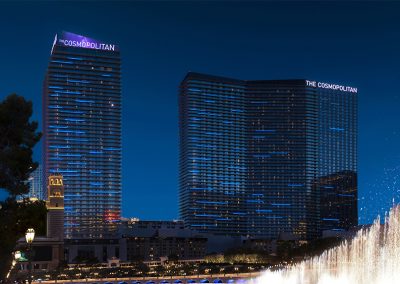 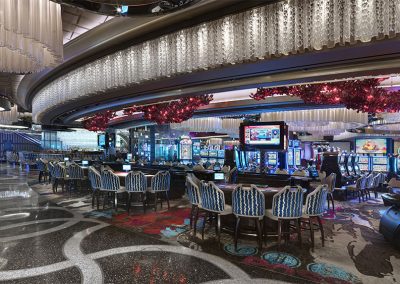 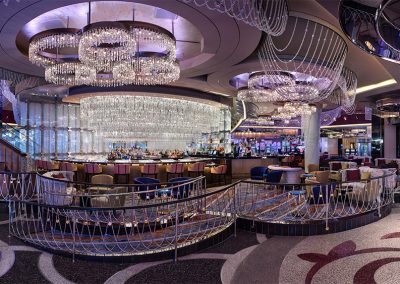 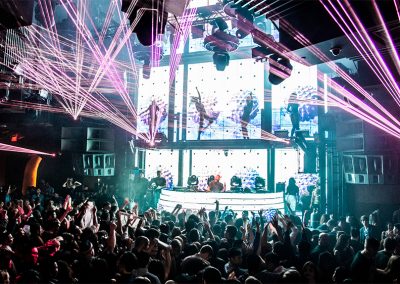 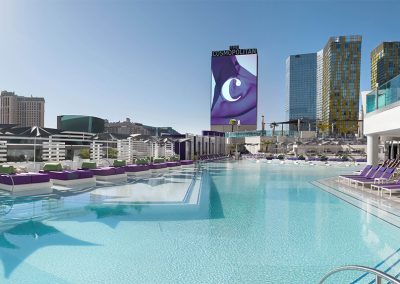 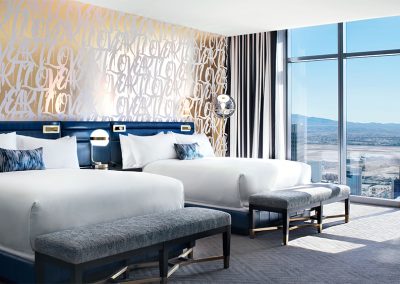 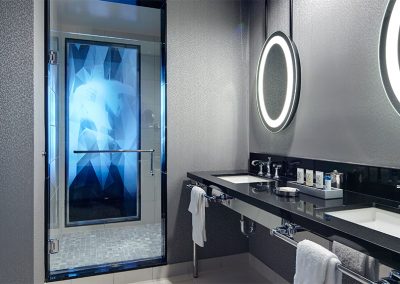 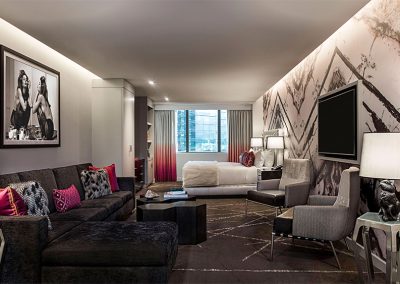 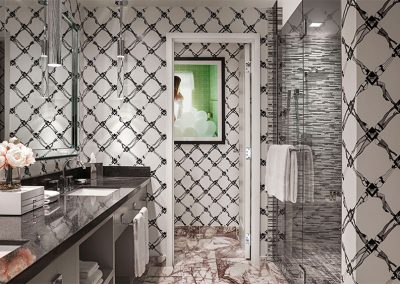 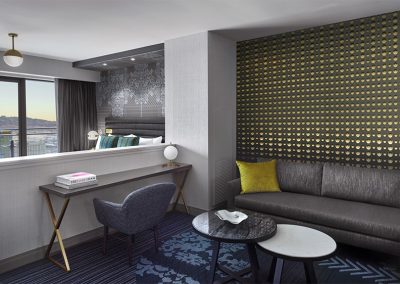 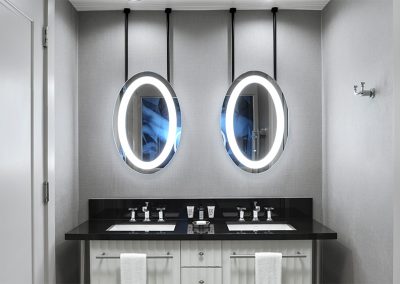 Bold is the word I keep coming back to at The Cosmopolitan of Las Vegas. From the layout to the design, from the casino to the rooms, everything about this hotel is bold, visual, and different from any other Las Vegas hotel. The closest comparison is to its neighbor Aria Las Vegas, a hotel that moved away from the traditional into modern, contemporary, cutting edge design. But Aria is practically staid in comparison to The Cosmo; the older hotels that once had big “wow” factors seem almost quaint.

The hotel is wedged onto a narrow chunk of land between Bellagio and CityCenter, directly across the street from Planet Hollywood, offering a great location for getting to a million different things nearby.

There is no theme here unless you count art and design as one. From the moment you enter the property you are treated to a visual feast that at times almost borders on overload.

Come in from the valet parking and you are greeted by a gorgeous lobby done in black marble with leather walls. The support columns are covered in giant video screens that can change the mood of the space, at one moment a pink field with butterflies and at another sparkling champagne bubbles. Notice the red desks and baroque white chandeliers at the registration area; covet the high backed, French bordello banquettes complete with built in pedestals for old-fashioned dial phones. Adjacent is a lobby lounge Vesper done in radiant, shimmering silver surrounding a traditionally designed wood bar.

Or come in from the southern Strip entrance directly into the casino and you are welcomed by a three-story “chandelier,” home to the Chandelier bar and featuring over two-million crystals surrounding three bars on multiple levels.

The moment you step in, you understand that this is not a typical Las Vegas hotel even though all typical things you’d find in a Las Vegas hotel are present and accounted for.

The main floor is mostly casino; about 100,000 square-feet of it. Although that’s a lot, it seems small because it follows the footprint of the building – long and narrow. The visual statements continue here with blown glass light fixtures and lots of texture on the walls. It’s cutting edge contemporary with just a hint of retro flavor.

There are lots of slots of all denominations and a fair amount video poker with most of the machines operating on a central server, meaning either the casino or you can change the theme, denomination, and style at will. They even have built in video interfaces that allow you to track your players’ club activity, make restaurant reservations, and more. Table games are scattered throughout the casino in clusters offering everything you’d expect from blackjack to craps to pai-gow and more. A high limit parlor has table games and there’s also a separate high limit slot area, which features the casino’s “Fastpay” system, where you don’t have to wait to get hand pays of jackpots over $1,200. Instead you register your tax info ahead of time and then wins are credited to the machine instantly .

Although there are a couple of bars and one small restaurant (their version of a 24-hour cafe) on the main floor, the vertical nature of the hotel’s design means that most of the rest of the stuff you may want to visit is on the levels above you.

The second floor has the retail outlets and a couple of restaurants including the upscale hamburger joint Holsteins Burgers and Shakes and Chinese/Mexican fusion concept China Poblano by celebrated chef José Andrés. The shops are mostly high-end boutiques, most with names you’ve never heard of unless you are from Europe but include clothing, home accessories, swimwear, gifts, cosmetics, and more.

Dining takes up the bulk of the third level with several options including New York City’s fantastic Estiatorio Milos Greek seafood by Costas Spiliadis complete with its own fish market; Spanish tapas restaurant Jaleo and   STK, the popular steakhouse from The One Group; and many others. Most are grouped around a central common area that offers a space for socializing before and after your meal with comfy seating and amusements such as a pool table.

There’s also a “secret” pizza joint hidden down a hallway with no signs. I could tell you where it is but then I’d have to kill you, apparently. All I’ll say is look for vinyl records and you’re getting really warm.

The last restaurant is the Wicked Spoon, a buffet that turns the buffet concept on its head with small prepared plates instead of the regular trays of food that you scoop your meals out of. It’s still all-you-can-eat but more along the lines of a never-ending tapas menu than a Las Vegas buffet.

The fourth floor has the hotel’s main pool overlooking The Strip and complete with a cabanas, a grill, and a stage for concerts. The 14th floor of the West Tower has another, quieter pool area, a spa, salon, and fitness center, and tennis courts.

That 14th floor pool area is the one that caught on fire in July of 2015. No one was seriously injured, thankfully.

The third pool is on the 17th floor of the East Tower operating as a day club. It features a shallow pool, gaming, private cabanas with their own infinity pools, and DJs from the adjacent nightclub.

Speaking of which, Marquee is the main nightlife component, a multi-level space with a big booming dance floor; a smaller “Library” space complete with books, a fireplace, and a pool table; and an ultralounge space called Boombox that offers big windows overlooking The Strip. Other bars and lounges include Vesper Bar and Chandelier.

The Chelsea showroom is a concert and events venue that can hold more than 3,000 people. It’s more intimate than it has any right to be, with a funky, industrial design, comfy chairs, and great sightlines. Bruno Mars and other big names have performed here and they also do concerts by the main pool.

There’s also the fun Rose Rabbit Lie restaurant and speakeasy that is also home to the outrageously weird and entertaining (but mostly weird) show Opium, by the same folks who do Absinthe (the show, not the drink).

Finally we get to the rooms. There are nearly 3,000 of them in two towers – the sort of squarish East Tower is the one closest to The Strip, while the longer West Tower stretches back toward Vdara and the rest of CityCenter.

City rooms are fairly standard hotel accommodations albeit done with a lot more style. They are 460 square feet, so above average, and they come with two queen or one king bed, a couple of chairs, a desk, a flat screen TV, and a swank bathroom with a shower stall (no bathtub). They are gorgeously decorated with modernist lines, soft fabrics, and lots of visual pizzazz.

City Studio rooms are 630 square feet and have a large seating area with its own TV and a mini-bar in addition to the sleeping area, all done in dramatic black and white with bursts of color in the drapes, throw pillows, curtains, and art work. They also have generously sized, beautifully designed bathrooms with double shower heads.

The Terrace Studio rooms are about the same size as the City Studios and have a similar decor palette, but they also feature a private 110 square foot terrace. Bathrooms are bigger here, too, with a soaking tub and a separate shower stall.

The top of the pecking order are the Terrace One-Bedroom suites, which are very similar in size to the Terrace Studio but it has a separate bedroom instead of one big studio style room

My single complaint with the rooms involves the frustrating amount and functionality of light switches. There are too many of them, they don’t seem to always work with any predictability, and the best way to deal with it is to either have them all on or all off with the master switch by the door and nothing in between.

Although the property does not carry the Marriott name, The Cosmo does have a marketing partnership with the hotel chain so that you can find it on the Marriott and Ritz-Carlton websites and use your Marriott rewards points to book rooms. You can also sign up for their Identity membership program, which will earn you points for all dollars you spend at the property not just the ones in the casino.

Service, every time I have visited, has been stellar. Pit bosses in the casino introduce themselves to players who join the tables and the dealers, cocktail servers, and the rest of the staff have been unfailingly friendly and apparently very happy to have customers to attend to.

Now comes the bad news: prices are among the highest in town. You might find a random weekday that will be under $200 per night, but generally speaking you’ll pay $200-$350 during the week and $300 and up (sometimes WAY up) on the weekend.

This puts them in the same price neighborhood as hotels like Bellagio, Venetian, and Wynn Las Vegas and if that’s the kind of budget you want to spend, you’d do very well spending it here. Note that they have a $39 per night (plus tax) resort fee on top of the nightly rate, among the highest in Vegas.

The Cosmo also charges for parking like most of the other major resorts on The Strip these days but hotel guests don’t have to pay. For everyone else, the rates are $10 per day for self parking and $18 per day for valet parking.

The overall vibe of the place is contemporary, hip, and young. Most of the people I talked to who were under 40 loved it and those that were over 40 were mixed at best.

I had a mostly positive impression of the place. I love the design elements and the modern interpretation of classic Las Vegas, but as a whole it is a bit overwhelming from both a visual and sound perspective at times. It definitely is not for everyone but if you can embrace the different direction it is heading in, The Cosmopolitan will be happy to embrace you back.