A beautiful, luxurious hotel in a terrific location.

Wait until you get your bill at check out.

Right in the heart of the action.

One of the most expensive in town.

Your room has everything you need.

Among the best anywhere.

This place is more about luxury than fun. 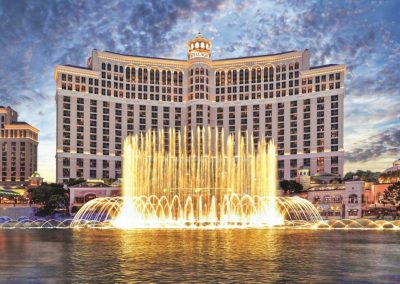 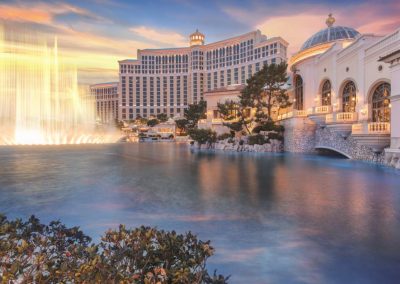 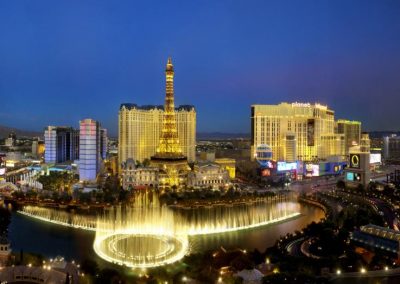 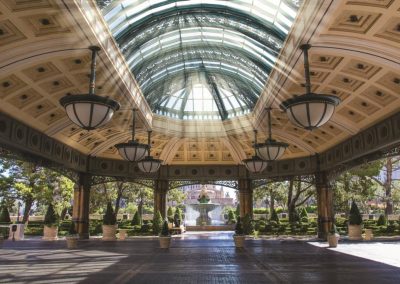 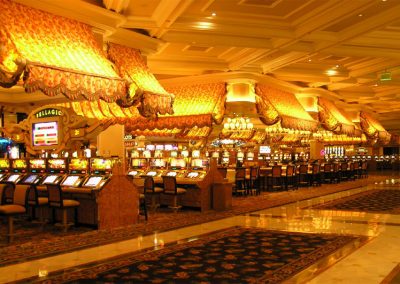 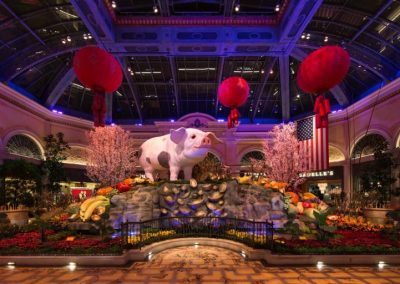 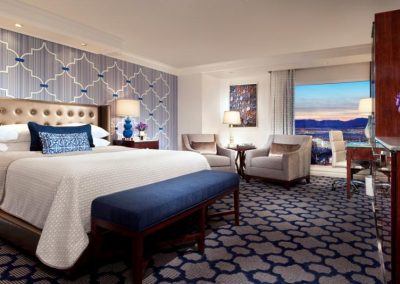 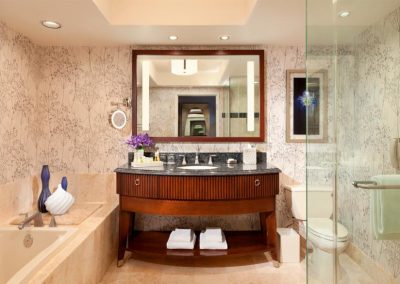 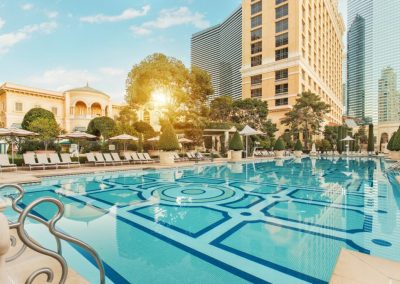 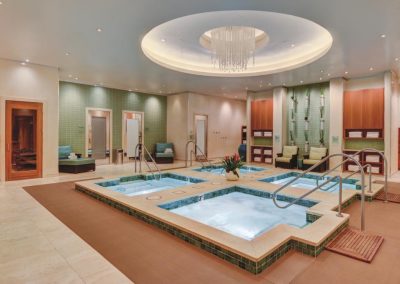 At an estimated cost of $1.6 billion, Bellagio was the most expensive hotel in the world when it opened in 1998. That seems like a pittance in today’s world when places like CityCenter cost four times as much, but at the time the goal was to create the most luxurious hotel in Las Vegas – perhaps even on the planet – and in many ways it succeeded.

But that was a long time ago. 1998 is literally last century and in a town like this one, which thrives on “New, Now, and Wow,” you need to find a way to stay current.

Bellagio does that by continually making changes. Don’t worry – they haven’t filled in the lake and turned it into a nightclub. The hotel retains its classic luxury feeling, but with some contemporary tweaks to keep things relevant.

Key among these tweaks are the rooms, which have been remodeled several times over the years. The current scheme is lighter, brighter, and more modern in a funky-retro way and the rooms come with 40″ flat screen TVs, upgraded furnishings and linens, new fixtures and minibars, and better connectivity options. The new look is a huge improvement over the staid (some might say boring and bland) furnishings and décor they used to have but Bellagio built its brand on staid so these contemporary digs may be a shock to the system for some.

There are three different color schemes – amber, blue and silver, and green and purple – that is matched in the fabrics, carpeting, and marble, all inspired by the Botanical Gardens downstairs. It’s sort of like a mid-century garden feeling and it is lovely, if a bit on the busy side at times.

The furnishings are plush and imminently comfortable, especially the bed, which has a feathery soft pillow top that encourages calls to room service because you don’t want to get up to go forage for food. Even the carpeting, usually an industrial grade afterthought, feels luxe under your bare feet.

There are a couple of ergonomic flaws to content with: the headboard has short wings that stick out just far enough to make it impossible to reach the light switch, phone, or curtain controls without an awkward twist; the desk has two drawers hanging down on either side that are hungry for the flesh on your knees – I was ready to heave the whole thing out the window but I was sure the hotel would frown on that. But really, if those are the worst things you have to contend with in a hotel room, you’ve got it pretty darned good.

The bathrooms are awash in marble with generous tubs, separate shower stalls, hair dryers, and good sized vanity. They aren’t huge but they are more than adequate for all but a small army. Do note that there is only one sink so get in line. Here too the appointments are especially luxurious, all the way down to the towels that feel a little softer than those at more economical hotels.

On the outside, Bellagio is still a stunning building despite the more modern neighbors, with its nearly 4,000 rooms towering above an eight-acre lake and faux Italian village. The detail is impressive with little touches all over the place that evoke a sense of romance and style. Take some time to examine the hand-laid tile floors, now becoming charmingly worn; spend a moment appreciating the stunning floral arrangements.

The lobby area has a giant, multi-colored glass chandelier that is made up of over 2,000 individual pieces, each valued at about $20,000 at the time it was installed. A large Botanical Garden is filled with flowers that change seasonally at some outrageous cost that I won’t depress you with here. Even the casino is richly appointed with thick, colorful canopies above all the gaming areas and special wooden casings on all the slot machines.

There are several high-end stores (Tiffany’s, Hermes, etc.), many restaurants that are considered to be among the best in the city, shows, nightclubs, attractions and more. See the related reviews below for more information on things to see, eat, and do at Bellagio.

The pool area is also beautiful with lush foliage in a classical setting. An adults-only pool is open during the summer although note that adults-only in this case simply means “no children” and not “no tops.” Private cabanas are available that have everything from TVs to your own attendant.

From what I’ve experienced, the service is as fantastic as it should be at a luxury hotel. Be forewarned however that this is a gigantic place, so you might not get the same kind of personal pampering that you would get at a 100 room boutique hotel.

Of course the price of luxury like this is not a low one. Rates during the slowest of weekdays may go as low as $169 but that is rare. You can usually expect to pay in the $200-$300 a night range for a standard room during the week and between $300 and $500 per night on weekends, sometimes more. Add in the mandatory $45 per night plus tax resort fee (covering Internet, gym access, and a few other things) and that’s a heck of a lot of money to pay for a room in Las Vegas no matter how nice it is.

And don’t forget about the fees for parking that were instituted in 2016. It costs $18 per day for self parking and $30 per day for valet for hotel guests and non-guests alike. The only way to get out of it is if you have a players’ club card at the Pearl or above level, which gets you free self-parking and the Gold or above level, which gets you free valet.

Although it has a lot of competition in the luxury class these days, Bellagio is still a one-of-a-kind hotel and a very compelling overall package for those who want a taste of the finer things in life.

Recommended for: People who enjoy the finer things in life.

Not recommended for: People who can’t afford the finer things in life.