Quiet elegance, lots to do, and cheap rates.

Far side of town.

Boulder Hwy location is a bummer.

A steal, especially when compared to Strip hotels.

Your money goes a long way at Boulder Station.

Nice rooms – some with terrific views.

Most of what you need is in your room.

There’s almost always a way to entertain yourself here.

One of the lesser known gems of Vegas. 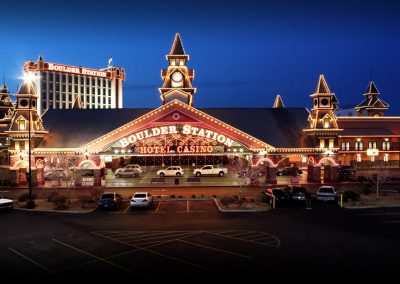 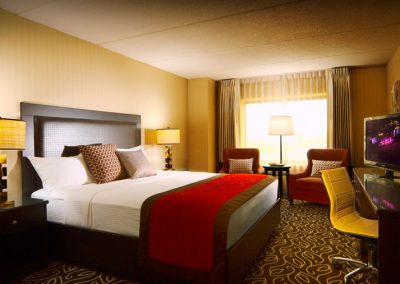 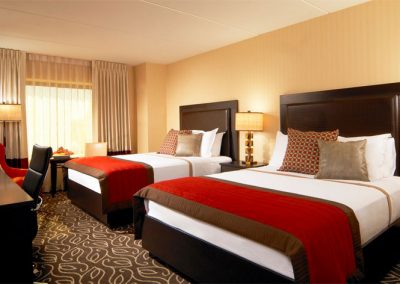 Located on the eastern edge of town on what is known as The Boulder Strip, Boulder Station is a great little hotel run by the same people who have done so well with Sunset, Texas, and Palace Station plus Green Valley Ranch, Red Rock Resort and both Fiesta hotels. They know their market – locals who want lots of gaming action, lots of entertainment choices, and lots of dining options. Boulder Station has all of that and more.

The hotel is done in a turn-of-the-century San Francisco train station chic, with dark woods dominating the décor. Even the casino has wood floors in some places, making a unique and inviting place in which to lose your money.

The casino is about 75,000 square-feet, smaller than what you’ll find at most of the Strip properties, but it feels bigger than it really is. Credit the open floor plan, high ceilings, and meandering layout for creating a low sense of claustrophobia. You’ll find all of the usual suspects here including slots (nickels up to $25), lots of video poker, table games (mostly starting at $5 limits), a keno lounge, a bingo room, a poker room, and a nice sportsbook.

For food your choices are almost limitless: a buffet, Chinese, pizza, pasta, a grill, Mexican, fast food, a coffee shop, and so on. While nothing here is going to win gastronomic awards, the places I have sampled have been fine to good and usually remarkably cheap.

There’s a small but well-equipped video arcade for the kids with the latest in shoot-em-ups, virtual skiing and driving, and a couple of carnival midway style offerings. For smaller tykes you can leave them at Kids Quest, an onsite daycare and entertainment facility for children six weeks to 12 years of age.

Regarding the latter it is worth noting that the employee at Kids Quest that I spoke to was almost hostile at first until she realized that I was there with a hotel employee. She apologized profusely saying that she was worried I was there to do something nefarious. “We have to protect our kids,” was her comment. I liked that.

But wait there’s more… including an 11-screen movie theater with stadium seating and a small but decent pool.

Oh yeah, they have hotel rooms also. All of their 300 rooms are located in a tower, with some pretty good views of the surrounding scenery. They aren’t huge but all come with fine furnishings, a king or two queen beds, a couple of chairs, flat screen TVs, high speed Internet (for a fee), iron and board, and hair dryers.

I’ve seen rates as low as $36 during the week and about double that on the weekends, although prices go up higher here than you’d expect when things get busy. But if you can get them cheap it’s a steal. Note they do have a $22.59 (including tax) nightly resort fee to tack on top of that, but it’s still going to be cheaper than what you’ll pay on The Strip.

Obviously you’ll need a rental car being way out here on The Boulder Strip but there are a few other casinos nearby including Arizona Charlie’s Boulder, The Eastside Cannery and Sam’s Town. Parking (both valet and self) is free. The regular Strip is probably 15-20 minutes away by surface streets depending on traffic and downtown is 5 minutes away via the freeway. They do have a free shuttle for guests to and from the airport, which is nice.

I really like Boulder Station for its pleasant mix of local friendliness and almost dizzying array of entertainment options. This is a terrific alternative to the Strip madness, especially for the prices.