Decent prices and you can’t beat the location.

Not quite as exciting as its neighbors.

Within walking distance to everything.

You can often stay here for less than surrounding hotels.

You get a lot for your loot here.

All the gaming options, but not as much energy.

Rooms are well stocked for all your needs.

Excellent – among the best in town.

Maybe not the “most” fun but fun anyway.

A worthy alternative to the more expensive neighbors. 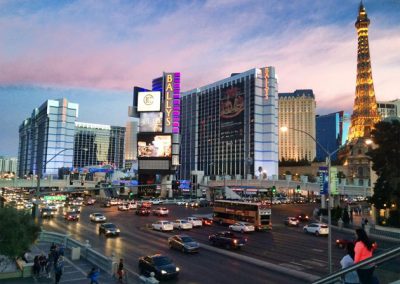 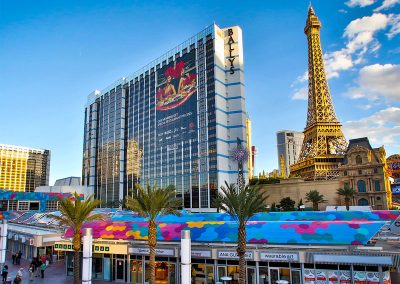 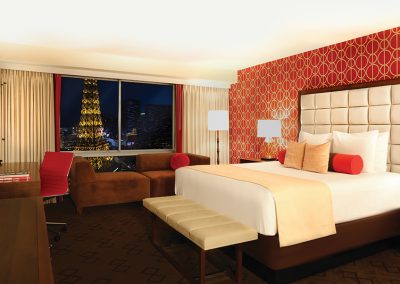 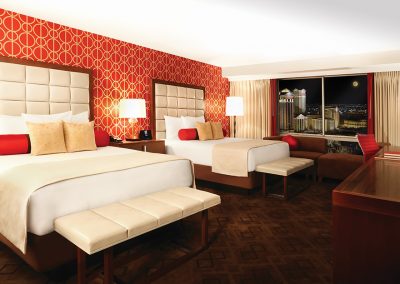 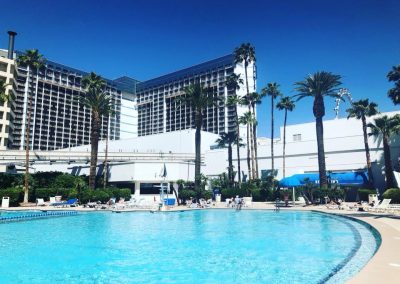 When the original MGM Grand opened in 1973 it was the largest and most luxurious hotel in the world. Four decades and a name change to Bally’s later, the hotel is no longer the biggest, boldest, or quite frankly “best” hotel in the city, much less the world. But really, that’s only because of comparisons to bigger, grander places like Bellagio just across the street. Remove those comparisons and you have a nice hotel, often at a fraction of what you’d pay to stay at most of its neighbors.

It’s tough to compete here in Vegas. After all, the hotel sits at what is undeniably one of the most competitive corners in the world. With hotels like the aforementioned Bellagio plus Paris, Caesars Palace, The Venetian, and The Mirage within steps of Bally’s front door, they would’ve had to make the building jump up and down and go “Hey, look at me!” just to get noticed.

But the building isn’t bouncing and Bally’s operates in a comfortable groove as the quiet, stable, relatively inexpensive piece of the Center Strip puzzle. In a way it has become the “safe bet” of The Strip. It may not make your pulse race like you’ve just placed your entire life-savings on Black-17, but you can still have a good time playing odd or even, right?

The revamp of the front of the hotel in 2015 improved it somewhat. The Grand Bazaar Shops now take up most of the space between the sidewalk and the front door of the hotel, with room for about 150 vendors selling all manner of “stuff” in a lively outdoor market. There is also a thing called the Crystal Starburst, which apparently is not a stripper, but a 14-foot tall Swarovski crystal ball that lights up at midnight in a Times Square homage (but it isn’t nearly as exciting).

The casino/lobby/restaurant row is one large room done in muted earth tones, marble, and chandeliers. They have done some freshening here and there including a makeover for the lounge and some of the restaurants and it’s nice, but again it’s nothing terribly special. I hate to use the word “unmemorable” but it seems to apply here. I’ve been to the Bally’s casino many times but when asked to describe it, all I can say is, “it’s nice”.

I can say that the spacing of the machines is good and the ceiling is high so there isn’t a sense of claustrophobia that I feel in other places. The good news, at least for me, is that I seem to win here often. Like serious winnings. Like one night when I hit a $2,000 jackpot and about 20 minutes later hit a $2,800 jackpot. Who cares about décor? I like this place.

A high-limit area offers machines from $5 to “you’ve-got-to-be-kidding” levels, a sports book serves up all the game wagers you can think of, and a short walkway takes you to the additional gaming options of neighbor and sister hotel Paris Las Vegas.

Which brings up a note. There is no parking garage for Bally’s – you have to park next door at Paris Las Vegas and use the walkway to get to Bally’s. It’s a relatively short walk, and getting to the front desk will take you about the same amount of time and energy as getting to the front desk of Paris. Or you could just skip it all and use the valet (provided it isn’t full, which it is usually on weekend nights). Of course either of those options are going to cost you. Valet is $24 per day and self parking is $12.

There are multiple room configurations including the Jubilee and Resort versions, but they are all pretty much the same. They have a bold red and brown color palate with some really nice accents like chrome sconces and lighting fixtures. It is all that retro-mod, “Mad Men” era style and perhaps tries a little too much to be hip, but they’re competitive now with the newer, bigger rooms elsewhere on The Strip. All have wireless Internet, flat panel TVs, refrigerators that you can put your own stuff in, safes, irons and boards, and a host of other amenities to make things comfortable.

As expected there are a host of restaurants and bars, a very nice pool area, a health club/spa, tennis courts, a few shows (although the long-running Jubilee! has closed), and a shopping arcade. Check the related reviews below for some things worth knowing about.

The service has always been top-notch, with a friendly, attentive staff; short waits for check-in, valet, and room service; and plenty of casino personnel for change and drinks.

So a very good hotel that you will probably overlook for something to get your heart pounding. How about this? Rates here are usually substantially less than the hotels that surround it. I’ve seen rates as low as $45 during the week and $129 on weekends. To be fair it is usually higher than that but you could double those rates and still come in less than what you’d pay at Bellagio, Paris, Caesars, and others nearby. This is before you add in the nightly resort fee of $37 (plus tax) per night that covers things like Internet, local calls, and fitness center access, but since everyone is charging a resort fee these days it still means you’ll probably end up with a lower bill than at neighboring hotels. I don’t know about you, but saving money gets my heart pounding.

Recommended for: People who want to be in the heart of the action but don’t want to pay through the nose for it.

Not recommended for: People who want to Instagram pictures of their rooms to make their friends jealous.